Save
Ten Fold Designs Revolutionary Structure that Self-Deploys in Minutes

Eight minutes. That is the length of time UK-based company Ten Fold Engineering’s self-deploying structures can transform itself from a portable rectangular container into a fully habitable space that can be used for either the residential or service sector. Transported by truck, the company offers a shelter that is energy efficient, eliminates labor costs, and is highly customizable in an effort to revolutionize the possibilities of prefabrication and construction.

With the only requirement for installation being a stable ground, the options for Ten Fold’s structures are expansive, including the ability to stack units for more space. The standard structure, the TF-64, includes 729 square feet of clear space when open and 112 square feet of storage space when closed. Doors, windows, and partition panels act as modular components, that can be arranged in a number of ways. The structure accommodates plumbing for showers, bathrooms, and kitchens to be fixed inside the unit or in adjoining modules. Aesthetic finishes such as the material and color of the walls are also adjustable.

The structures have the ability to be equipped with clean energy technologies such as solar power, batteries, water storage and water treatment in the units or via bolt-on power system pods. With this capability, the structures can go off-grid, which is beneficial for remote and extreme climates. The long-lasting steel design is constructed to meet BREEAM and LEED standards according to Ten Fold.

Not only does the portable structure represent a rethinking of residential design, but also an easily implemented solution to help communities in need. The shelters have the potential to provide services such as mobile clinics or grocery stores.

A majority of the videos on the website are CGI renderings to show the versatility of the technology, but the company also employed six physical prototypes to understand the theoretical mechanics of the structure. In addition, a full-scale prototype was built to help the public and potential customers understand its practical use.

The price of the units will depend on their size and complexity, and also could vary based on manufacturer or country according to Ten Fold. A list of prices for standard units will be released in late July 2017.

The project still has steps to complete before wide-spread distribution, such as converting the drawings to American Building Codes, but Ten Fold anticipates that delivery of the units will be guaranteed for most areas by the end of 2018. 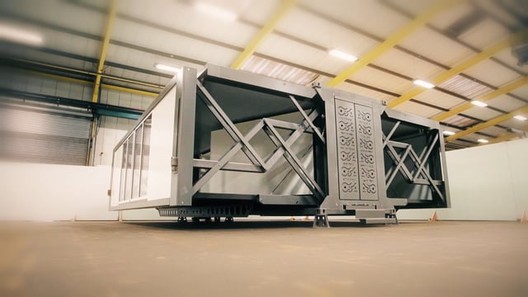