More than 2000 years ago, the Roman Empire invented a unique marine concrete that allowed for the construction of enormous, durable structures – even underwater. Incredibly, the exact chemical properties of this concrete mixture have eluded scientists to this day – but now, researchers from the University of Utah believe they may have finally cracked the code.

According to the findings in the journal American Mineralogist, the secret lies in the chemical properties of two of the mixture’s components: lime and volcanic ash, which contained a rare mineral known as aluminium tobermorite. When exposed to sea water, the substance would crystallize in the lime while curing. Rather than be eroded by the water, its presence actually gave the material additional strength.

Using an electron microscope, X-ray micro-diffraction and Raman spectroscopy, the researchers were able to map the distribution of elements in remaining Roman architectural works. What they found was significant amounts of tobermorite growing through the composition of the concrete, and a related, porous mineral called phillipsite. Through continued exposure to seawater, the scientists predict, the crystal were able to keep growing over time, reinforcing the concrete and preventing cracks from forming.

"Contrary to the principles of modern cement-based concrete," said lead author Marie Jackson. "The Romans created a rock-like concrete that thrives in open chemical exchange with seawater. It's a very rare occurrence in the Earth."

The scientists hope that the findings can be used to improve modern concrete techniques – resulting in a longer-lasting and more environmentally-sustainable material.

“I think [the research] opens up a completely new perspective for how concrete can be made – that what we consider corrosion processes can actually produce extremely beneficial mineral cement and lead to continued resilience, in fact, enhanced perhaps resilience over time,” said Jackson.

One current project suggested as ideal for experimenting with Roman concrete is the seawall for the Swansea lagoon in Wales.

“There’s many applications but further work is needed to create those mixes. We’ve started but there is a lot of fine-tuning that needs to happen,” said Jackson. “The challenge is to develop methods that use common volcanic products – and that is actually what we are doing right now.”

Learn more about the study, here.

News via the Guardian, BBC.

Scientists from Nanyang Technological University ( NTU Singapore) have developed a bendable variety of concrete called ConFlexPave, which in addition to its increased flexibility, is both stronger and more durable than traditional concrete. Working at the NTU-JTC Industrial Infrastructure Innovation Centre (I³C), the team created the material by introducing polymer microfibers into the concrete mixture. 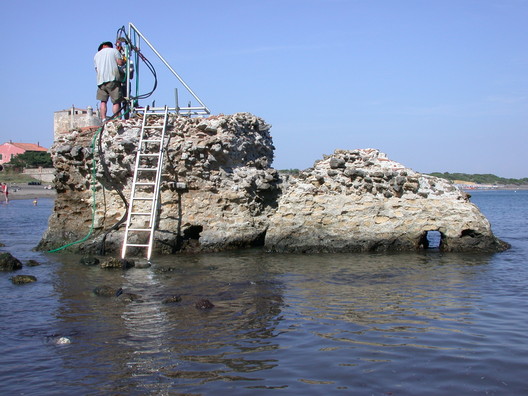