Aedas has unveiled their Phase II designs of Hengqin Headquarters Complex in Zhuhai, China. The site is located on an island that sits near the Lotus Bridge linking Zhuhai to Macau, overlooking some of the largest casino resorts across the river.

The complex is set to be an integrated cultural tourism-oriented complex with two high-rise Grade-A office towers and a series of retail, banquet, entertainment and leisure venues. The form of the main buildings is said to have taken inspiration from the traditional Chinese symbol of two dragons chasing for a pearl, meant to symbolize good fortune and happiness: 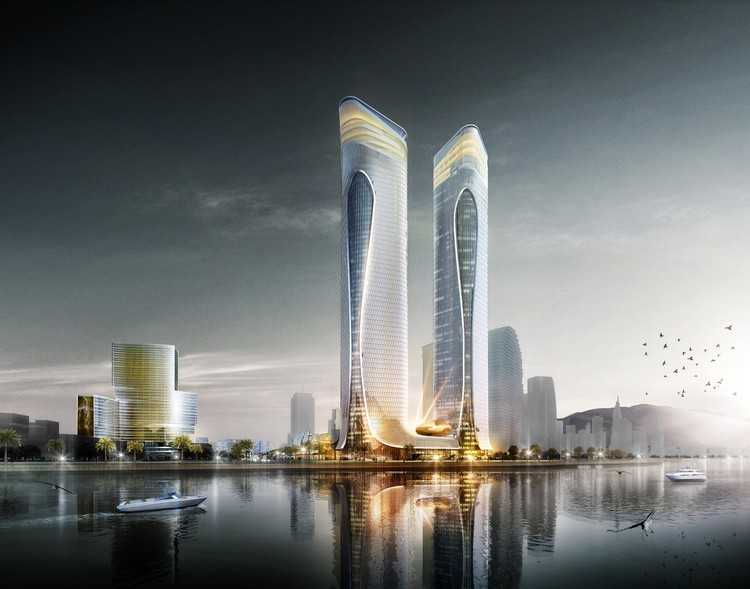 [The] design of the two towers and the small banquet building in between took reference from this totem. The towers portray a sense of strength and power with a façade that shimmers under the sun; while the banquet building looks like an exquisite pearl – Aedas.

The podium design takes inspiration from the existing Lotus Bridge, resembling a blooming lotus flower with “leaves” wrapping around the shopping center and retail streets. The master plan is arranged to drive out traffic from various retail, leisure and green hubs towards the central sunken plaza. The upper levels will serve as shelters for people on the lower levels in both sunny and rainy weather characteristic of Zhuhai.

Hengqin Island is no stranger to architecture giant Aedas, who has also designed the nearby MCC Port Complex (for the same client) and has recently won a competition for a mountaintop resort in Hengqin. Dragon-based symbols are also a growing theme in the China-based firm, who won another competition to design a dragon/phoenix-inspire transportation hub in Sanya, China.

Construction of the complex has already begun, as is set to be complete in 2019.

Aedas has been selected as the winners of a competition to design a new luxury resort located on Hengqin Island in Zhuhai, China. Inspired by the lush natural scenery of the island and by the traditional Lingnan architectural style, the resort promises to offer "a haven of comfort and relaxation amidst the bustling city life." 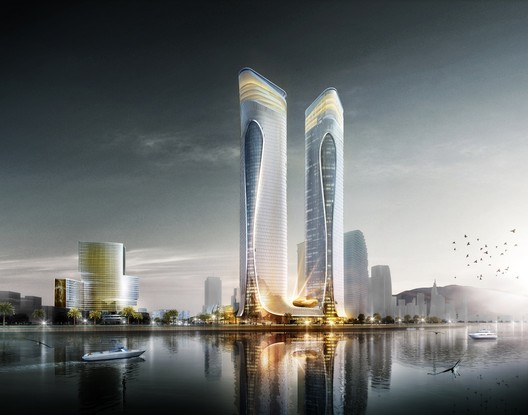