As part of the Third Istanbul Biennial, NOHlab and architect Buşra Tunç collaborated with HAS Architects to create OCULUS: an experiential light and sound-based installation. The exhibit focuses on employing a historic location, the Single-Dome Hall of the historic Istanbul Imperial Arsenal, to reinterpret a spatial moment using technology and design. The central theme of the project is the experimentation of permanence, illustrated in the juxtaposition between the dynamic visuals displayed on the temporary structure and the 16th-century architecture. 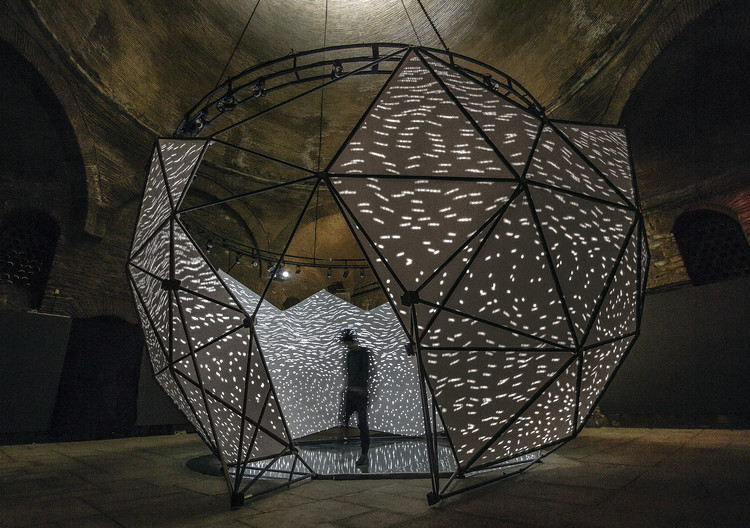 The form of the installation is a response to the geometry of the existing dome. Offering a contemporary interpretation of the original building’s arches, the “light dome” is a geodesic structure that features large triangular panels on which visuals are displayed. Visitors step inside the space and are almost completely enveloped in the semicircle of interlocking screens, able to fully immerse in its atmosphere.

According to the architects, the sense that comes with being surrounded is meant to help disconnect the viewer’s consciousness of time and place. The top of the structure is left without panels, allowing for an uninterrupted dialogue between the exhibit and its context. To highlight this connection, a designated ray of light focuses itself on the oculus of the dome, then disperses.

From the Architects: Taking the Single-Dome Hall as the focal point, the exhibition uses contemporary interpretations to alternate between old and new, whole and fragment, real and virtual, balanced and unbalanced states.

The graphics guide viewers through a narrative that weaves together the tangible and virtual in an attempt to impart a disoriented perception of space. Undulating geometries sweep across the screens around the dark enclosure, shifting in color and light intensity. Ranging from visualizing fragments of architectural space to lush metaphysical landscapes, the project showcases a connection between design, technology, and environment. To complete the interactive performance, the visuals are accompanied by an atmospheric soundtrack scored by Giray Gürkal that queues itself to match its visual counterpart.

The project’s intention is to represent the ideologies of HAS Architects—specifically showcasing a forward-thinking mindset that integrates digital technology with architectural thinking. Through its form and sensory experience, OCULUS situates itself as both installation art and a commentary on the spatial and temporal questions of the future of the built environment. 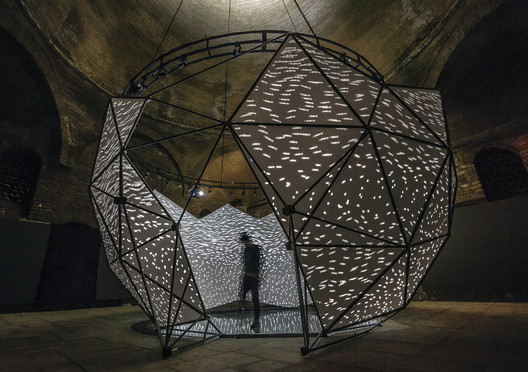