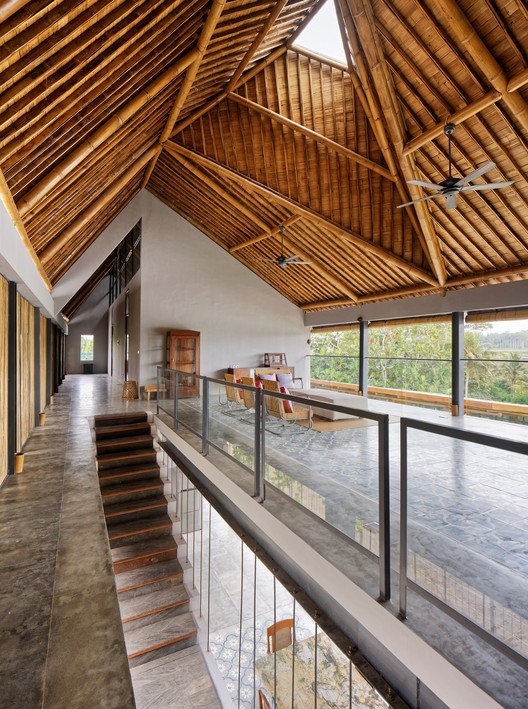 Text description provided by the architects. This house is located in Kelating, Tabanan, Bali. The owner named it Casablancka. This location is only one half hours from The Ngurah Rai International Airport Bali. The new residence need to be adjusted according to the site, with slooping contour to the river and also there is existing Javanese house located close to the river.

The main strategy is to apply the concept of The Balinese Architecture The tripartite divisions of zoning by developing the concept of Tri Mandala is spatial concept describing three parts of realms, from Nista Mandala - the outer and lower mundane less-sacred realm, Madya Mandala - the intermediate middle realm, to Utama Mandala - the inner and higher most important sacred realm. where on the center side is akasa or empty space or zen area. It can be used as a place to play Pétanque just like a game in France. This space becomes a communication device for the people who stay in this residence. It also represent the two different culture of the client, between west and east, between France and Indonesia.

The Balinese concept of Sanga Mandala consists of several separate pavilions and its placement is always set to the hierarchy of virtues and contempt also the rules of space division and zoning. The Sanga Mandala is the spatial concept concerning with directions that divide an area into nine parts according to eight main cardinal directions and central (zenith).

The pattern of its mass composition also rely on Swastika pattern as the pattern adopted by the Balinese pattern. In Balinese traditional house normaly divided into nine compotition and also consists of several separate pavilion. This residence is the interpretation of this concept with the modern design.

The concept of the building is the transformation of traditional Balinese buildings named Taring. Taring is temporary structure made of bamboo usually made by the Balinese community for special ocassion such as wedding, cremation, and etc. The important thing at the Taring concept is that the seperation between floors, walls, and roof structures. Which stand independently. But it has a special relationship, which is to be implemented in Casablancka residence.

In this project we attempted to bring people close to the nature. Wall made as simple as possible depend on it needs. The wall made of locally available bricks, and to be arranged zig zag parallelly and put the concrete inside. It will reduce the hot weather in Bali but at the same time bring the interior into natural color tone, brick orange colour. Since the building is in tropical paradise all the building mass to be built as open as possible so all the space isactually only defined by the floating floor, so the natural wind can be enter freely.

The Bamboo Structure stand independently as a structure of column and as roof supporting structure, it will allow for natural light into the building from the glass above the brick walls.

The floor finishes consist of two type. One is handmade grey cement color by local people. And the second one is colorful cement handmade in Java which use to be part of colonials buildings in thirties, mostly for the Dutch building.

The wall is a statement and also redefinition of the border between inside and outside, it contains of wall made of bricks and wall made of transparent glass. It is to connect the contemporary society with the nature.

The roof made of flattened bamboo, the mountain shape of the building is to bring the light into the each different room. It represents the relationship between the people and the sky.

The structure columns made of concrete and steel to bring the modern material as a combination between East and West between traditional bamboo and other industrial material.

The Interior Concept is the transformation of a dialogue between East and West, most of the furniture use the recycled material of early 40’s during the occupation of the Dutch period in Indonesia with the modern interpretation, by using soft color of blue and white fabric. and also use old wooden furniture from Java.