Powerhouse Company have won a competition to create a new mixed-use hub in Eindhoven, Netherlands. For the competition, Powerhouse teamed up with landscape architects ZUS and developer Amvest to design a trio of skyscrapers forming the winning proposal for a new urban plaza, called “District E”. The 70,000 square meter proposal will be located next to Eindhoven Station. 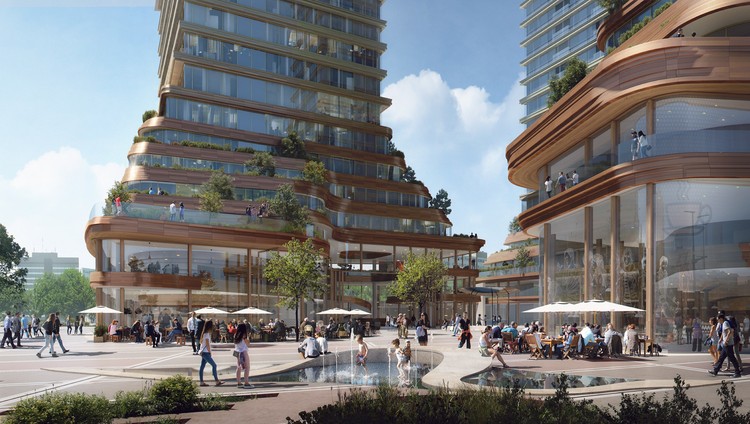 The flexible construction and installation technology of District E anticipates the future growth of Eindhoven as a sustainable, innovative and economic hotspot. The seamless integration of architecture and landscape design guarantees a new public space filled with activity and a wide spectrum of green spaces – Powerhouse Company.

Three tall towers collect in corresponding plinths, ranging from 76 to 158 meters in height. The towers will combine a residential program of approximately 450 homes, 20 percent of which will be social housing. A mixture of public amenities will be added, ranging from a hotel, shops/restaurants, a student study center and exhibition spaces. District E’s new “city plaza” aims to balance the 17th-century buildings from the old Eindhoven center alongside the large-scale 20th-century projects near the railway.

Powerhouse described the use of the plinths as a tool for the skyscrapers to be set back, ensuring that “Eindhoven station, a national monument, is honored by giving it space and relating to its scale.” A diagonal axis within the new urban plaza is another key element to the design, as described by Powerhouse:

An essential and defining gesture in the design is the diagonal axis that visually connects the station and the ‘Philipstoren’, a monument and symbol of Eindhoven’s industrial and technological heritage. This axis cuts through the ensemble and in-so-doing linking the station’s square, the new city plaza and the '18 September' square like a set of beads on a thread - Powerhouse Company.

With offices in Rotterdam, Beijing, and Munich, the architecture office has a portfolio of mixed-use projects including inSports Beijing to the Maastricht Pathé theater. The firm also beat out a bevy of heavyweight contenders in 2014 with their competition-winning proposal of a 100m observation tower in Çanakkale, Turkey.

MVRDV to Complete Two Stone Mixed-Use Towers in The Hague

MVRDV and developer Provast has revealed plans for a two new mixed-use residential towers in The Hague that will add over 500 new apartments to the city's Central Business District. Located on Grotiusplaats adjacent to the National Library and near the city's Central Station, the "Grotius Towers" will offer 61,800 square meters of residential and commercial space to service the needs of The Hague 's growing downtown core. 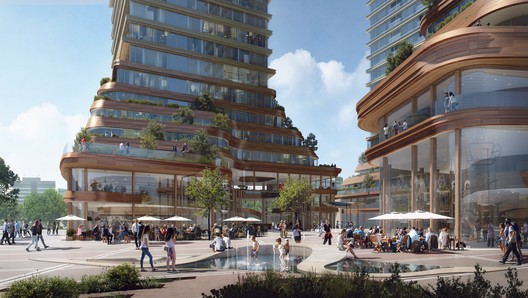