John Rhodes, a director of HOK’s Sports + Recreation + Entertainment practice, met with legendary rugby players Jamie Roberts (Wales), Tim Visser (Scotland), James Horwill (Australia) and Danny Care (England) to capture their ideas, both as players and fans. The findings were collated into a video by HOK, which you can watch below.

The rugby legends placed heavy influence on the connection between players and fans, highlighting how city center stadiums create the pre-match drama of players driving through bustling streets. Furthermore, the decreased area of city stadiums is mitigated by steeper viewing stands, creating a more intimate connection between fans and players. As a throwback to the rugby stadiums of the 1960s, the players proposed an enlarged standing area in the action-fueled ‘red zone’ between the 22m line and touch line, generating further density and noise from excited fans.

Connectivity and modern technology were also at the forefront of the legends’ minds. A fiber optics playing field could display real-time information to fans during intervals, whilst player-tracking GPS currently used for team statistics could be made available to fans, measuring everything from distance run to force of collisions. More radically, a movable overhead gantry could follow the action, projecting a laser to mark the game line whilst providing an incredible aerial view for lucky spectators.

Any modern, iconic sports ground must provide an exceptional experience for fans. The unique passion of fans is fundamental to the sport and, as architects, we need to design stadiums that maximize this energy…The players gave us exceptional insight into what affects elite athletes. As avid fans, they also provided an invaluable perspective. This has improved our understanding of how to design the best stadiums for both rugby fans and players – John Rhodes, Director of HOK Sports, Recreation + Energy. 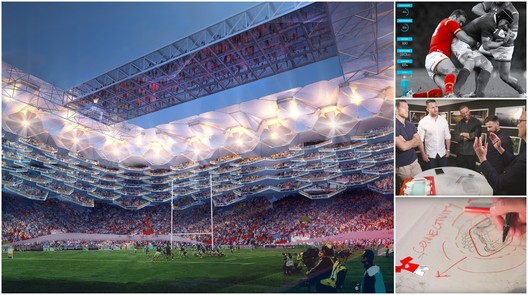