The world’s first international Bicycle Architecture Biënnale - a showcase of outstanding built environment solutions around cycling - will take place this month in Amsterdam.

The event - organized by leading cycling innovation agency CycleSpace - takes place on Wednesday 14 June and will celebrate the cutting edge and high profile building designs that are facilitating bicycle travel, storage and safety around the world.

The biënnale is being launched in Amsterdam in recognition of the city’s leading status for prioritizing cycling travel and forms one of the breakout events as part of the global cycling conference Velo-City. The biënnale aims to reflect how cycling can improve urban living and how design solutions can not only meet transit needs but can also inspire and facilitate greater cycling uptake.

The designs profiled at the biënnale have been curated by Professor Steven Fleming, whose new book Velotopia about bicycle architecture is out this month. The biënnale will show off the work of 14 international designers, from all corners of the globe. Amongst the designs selected are The West Village Basis Yard apartment complex in Chengdu by Jiakun Architects, where cyclists can ride from their tenth floor apartments all the way down to the ground, SkyCycle, a controversial and largely misunderstood proposal from Foster + Partners to build new buildings for cyclists in the airspace above London’s train lines, and Hassell Architects’ Medibank Building in Melbourne with its spiraling bike ramp inside the main atrium.

The biënnale takes place at the Zuiveringshal in Amsterdam’s Westerpark and will be open to delegates attending Velo-City. The show will then go on public display, details of which will be announced on the biënnale website www.bab2017.org. A limited number of public tickets for the biënnale are also available by emailing connect@cyclespace.org. The biënnale is being supported by the building firm BAM, and it is one of a number of international programs organized by CycleSpace, which also initiated the global Bicycle Mayor network. The first Bicycle Mayor summit takes place a few days before the biënnale - also in Amsterdam - on 10 and 11 June.

Professor Steven Fleming said: “In recent years we have witnessed a profound change in attitude among architects toward bikes. Bikes used to be lower than horses in architects’ eyes. Facilities for them always seemed built on the cheap, as though they would only be torn down when all the cyclists could afford cars. This exhibition celebrates buildings that roll out a red carpet for bikes. They show bicycle planning doesn’t stop at the curb side. As the built environment grows with this mode—that we now know is the healthiest and fastest for making connections in cities—the desires of cyclists are going to start shaping the design of new buildings.”

Lee Feldman, co-founder of CycleSpace, said: “Amsterdam has shown how we can make cities more liveable when we put the bicycle first. It facilitates a change in how we think and move that improves so many aspects of our lives, from physical and mental health to clean air and family friendly neighbourhoods. The bicycle is a vehicle to literally transform the way we live our lives. Architects, urban planners, designers, futurists, system disruptors, and so many others all have great ideas about how the built environment influences greater ridership in cities, and by celebrating that and showcasing it we can encourage and inspire even more powerful ideas for the future.”

For more information, go to www.bab2017.org

CycleSpace is making the shift from car-centric to human-centric cities possible through acting as a catalyst for breakthrough solutions around cycling. We create and accelerate ideas, kick start collaborations, and launch global innovations and programs. We have an ambitious goal - for 50% of all city trips to be by bike by 2030. We call this ‘50 by 30’ and we believe it will lead to fundamentally healthier, happier and more prosperous cities. Cycling is more than transportation. It is transformation. In all our work, we never stop asking ‘Where can the bicycle take you?’

Velo-City takes place in Arnhem and Nijmegen from 13 to 16 June. A break out day then takes place in Amsterdam on 14 June and will conclude with the Bicycle Architecture Biënnale.

10 Points of a Bicycling Architecture

A revolution is occurring in street design. New York, arguably the world's bellwether city, has let everyday citizens cycle for transport. They have done that by designating one lane on most Avenues to bicyclists only, with barriers to protect them from traffic.

Toward Cycle Cities: How Architects Must Make Bikes Their Guiding Inspiration

If Henry Ford were reincarnated as a bike maker, Le Corbusier as an architect of buildings and cities for bikes, and Robert Moses as their bike-loving ally in government, today's bike plans would be far more ambitious in scope. 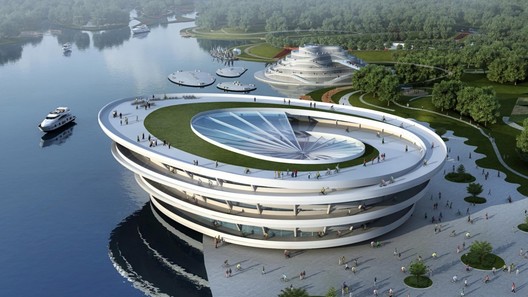