At the request of Frank Lloyd Wright, Aaron Green established a San Francisco office in 1951, both for his own practice and as Mr. Wright’s West Coast Representative. Aaron Green participated in over thirty Frank Lloyd Wright projects and was appointed by Frank Lloyd Wright as associated architect for the Marin County Civic Center Project.The highlight of his career occurred in 1999 when he won a national competition to design a visionary open to the world private high school in Greensboro, North Carolina, on a 100 acre wooded site with a 25 acre lake. The project infrastructure includes the largest single loop geothermal system in the world..Shortly before his passing, Aaron Green was awarded the 1st old medal by the Frank Lloyd Wright Foundation in recognition of his career and accomplishments and dedication to organic architecture. When asked who Aaron Green was, Wright commented, “Aaron Green is my son.” 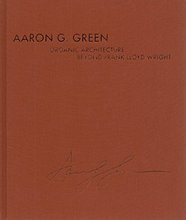