Antoni Gaudí has a reputation as monastic, mad and hermetic, but the architect of many of the buildings that define Barcelona’s cityscape was no mad eccentric; he was a genius inspired by his faith in nature and the divine.

Picking up the same strands of eclecticism and art nouveau current in fin de siècle European architecture, Gaudi them into an idiom unique to himself and Barcelona to create a series of buildings as revolutionary in their engineering as astonishing for their design.

'This is Gaudi' looks at the projects he is most famous for, such as Sagrada Familia and Casa Mila, but also at other lesser-known projects, works and commissions that enabled his architectural and artistic development. This book reveals the exuberant world and groundbreaking work of this unique figure in the history of modern architecture. 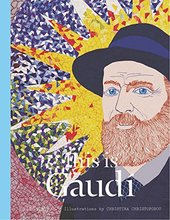 This is Gaudí
Buy from
amazon.com
Share
Or
Copy