Text description provided by the architects. This KPWT residence project offers an example of a modern house in the tropical climate country. In order to build a modern architecture in this particular area, it is not only about a form, less-is-more, clean and clear, box-like building but also, for its longevity, building needs some sun shading devices as well as a roof for the rains. This project offers architecture which is more applicable.

The house is on an 800 square metre land plot, situated in a residential area of Bangkok, Thailand where the owner wants to build a house for his contemporary family; two storey, open-plan living, dining area with a double volume space and three bedrooms are altogether in the main building whereas a 6 metre high ceiling multifunctioning hall and cinema room are in one another. Both are connected to each other by a gallery on the second floor with another bedroom behind it.

Orientation of the building has strong relationship with the context, the 6 metre high building turns its back on the unpleasant 8 storey office building nearby in the north, whilst the 2 storey main wing makes a connection across the site to adjacent existing 1970s modern house in the south, creating an interesting conversation between the two modern houses that are built through different times.

Mass of the architecture itself illustrates admiration to the site, the long horizontal lines are used to emphasise and celebrate long frontage of this land plot, 40 metre long facing the road.  For the tropical climate aspect, main surface of the house is slightly angled to create sun shading for itself instead of only plain surface confronting the sun. The aluminium windows also makes a feature, rather than building another wall as a second skin or a sun protection, which is widely used elsewhere, the windows are preferably designed to be sun shading themselves by embedding the vertical frame gradiently to control daylight from sunrise to sunset. 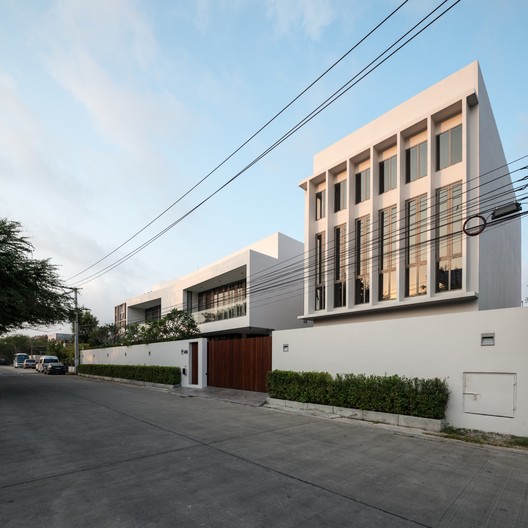