Save
The Best Art & Architecture Installations of Coachella 2017

Spring is finally here, which means over 100,000 people are making the trip to the California desert for the 2017 edition of the Coachella Valley Music and Arts Festival. In addition to the top-billed musicians, the event has become known as a showcase for some of the best up-and-coming artists, designers and architects to work on a large-scale, instagram-friendly scene.

With the first weekend now in the books, we’ve rounded up some of the best art/architecture installations from this year’s festival.

In “Crown Ether,” a community on columns rises towards the sky, exploring the “relationship of the terrestrial to the sublime,” explains Brooklyn-based artist Olalekan Jeyifous, who spent part of his childhood in Ilé-Ifẹ̀, Nigeria. Like much of Jeyifous’ work, the title belies an interest in both the symbolic and the scientific, referring to the cyclic compound molecules that cluster in the form of a ring. These sculptures, too, crowning trunk-like pillars, gather towards each other in a circle, “like a coming together of people around the music and the arts,” says the Cornell-trained architect. Even though Jeyifous no longer works on permanent residences, the possibility of prospective inhabitants is not far from mind. His artworks – accompanied by detailed renderings and narratives of who might live there – are part of a longstanding interest in experimental public architecture.

For his “lighthouse” (the uppermost curve pointing south toward another country), Prado arranged thousands of rounded mirrors at “concurrent yet separated angles” to create a tower from light-catching fragments. “It’s a way to empirically present how the mind turns the continuous interconnectedness of phenomena into separate beings,” Prado says of his waypost for travelers, which takes its title from the last line of the Emma Lazarus poem inscribed at the the Statue of Liberty.

“The changes produced by the mirrors are not limited to a well-defined geometric, enclosed space and a body that walks in it. It encompasses the changes in light during the day, a much larger landscape, and all of its idiosyncratic qualities. But, more importantly, a group of viewers” – the not-so-huddled masses – ”that now overlap each other as they approach.”

“We want to create a visual bath, something you can explore and get lost in,” says Adam Frezza of the immersive ecosystems – like “wobbly” islands and a greenhouse full of imaginary plants – he makes with partner Terri Chiao. As Chiaozza (pronounced like “wowza”), the Brooklyn-based artists spent three months in the Coachella Valley constructing a nearly acre-spanning landscape of whimsical geographic features recalling the shifting views around each bend of a boulder field.

Chiao and Frezza handbuilt each stucco-covered sculpture with a “huge and varied” crew spanning artist friends, highly skilled carpenters and fabricators, and a local seamstress who “usually makes quinceanera dresses,” and who redirected her talents to the playful fabric fronds reaching out of the tips. “The driving element in our practice is to create curious and optimistic works that encourage a sense of joy,” Frezza says. Strolling through Chiaozza’s buoyant garden is about being present in the moment, to “find a beautiful spot to spend some time, a place to rest, or to run around and be excited with the world around you.”

Is This What Brings Things Into Focus? / Joanne Tatham and Tom O’Sullivan

Like the ancient fable about the blind man and the elephant, UK-based artists Joanne Tatham and Tom O’Sullivan create work that is observable only in sections but larger than its individual parts. “I’ve been thinking about how to make a work that both fits and doesn’t,” [Tatham] says, of anti-monuments at once grand and awkward, or like “the elephant in the room.” In the photographic evidence of this year’s Coachella, the duo’s “herd” – rising up to six stories (75 feet) – will almost certainly be unintentional photobombers. But despite lumbering size and vaguely mammalian forms, the sculptures are not meant to be any particular animal.

“I was interested in the idea of a beast-without-identity. Almost like a comic fool character, or a kind of everyman or underdog,” says O’Sullivan, who has represented Scotland in the Venice Biennale. It’s also a deliberate subversion of spectacle: to make something with oversized visual impact but that “might unintentionally reveal things about the situation it blunders into,” he adds. “It’s treating an artwork as a kind of complex instrument for viewing the world – bringing certain things in and out of focus.”

In additional to organizing and promoting music festivals around the world, events producer Do LaB constructs interactive environments and unique structures that “exhibit and celebrate our ethos of human connection, art as transformative experience, and environmental sustainability.

New to Coachella this year is the Beacon pavilion, which used over 15 different software programs to create design elements, including modeling software, engineering calculation software, modeling software for sun studies and video software for content design. A floating center column supports 2000 pounds of structure, which is held in place mid-air using 21 cables and the principles of tensegrity.

Project descriptions from the festival's website, Beacon pavilion description via Do Lab. 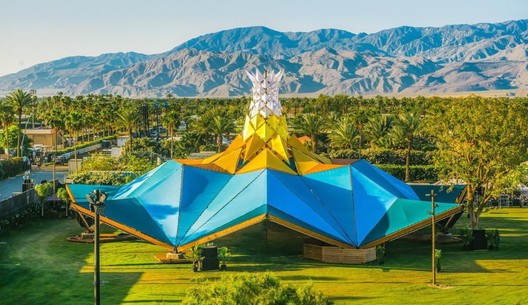