Save
The Red Wall Behind Martin Solveig's Latest Music Video

Almost one year has passed since the music video release of 'Do It Right' by French artist Martin Solveig. Although deprived of a star-studded tennis match on this occasion, over 15 million viewers have been treated to stunning vistas of The Red Wall, a vibrant fortress of color designed by Ricardo Bofill in Calp, Spain.

As well as being an inspiration for hundreds of architects, who have admired its striking color palette and interlocking staircases, The Red Wall succeeded in capturing the imagination of Solveig and the team at Monsieur l'Agent, the French agency who produced the music video.

Built in 1968, La Muralla Roja (The Red Wall) is Inspired by the traditional Arab Mediterranean casbah (castle). The scheme is characterized by its series of interlocking stairs, platforms and bridges giving access to 50 apartments, as well as its striking wall coloring, selected to either contrast with nature or compliment its purity. Complete with roof terraces, a swimming pool, sauna, and generous apartment sizes, The Red Wall reflects Bofill's desire to provide enhanced living amongst the Alicante cliffs.

For architects, the Solveig music video is a pleasure to watch, with its sweeping views of courtyards and rooftops, framed shots of staircases and contrasting walls,  and recognition of details such as pool tiles and shadow.

The architecture of The Red Wall weighs heavily on many other aspects of the video, with the extra props and characters' clothing designed to compliment the building's vibrant colors. Towards the end of the video, a series of scenes along the rocky Calp coastline feature abstract shapes and objects, also respecting the chromatic palette of The Red Wall. 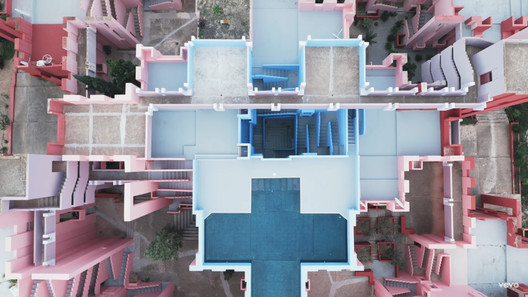