After being chosen as the winning city to be designated as the World Design Capital for 2018, Mexico City has revealed the theme of the year-long program of events and installations: Socially Responsible Design.

The announcement was made this week by Design Week Mexico, the country’s leading platform for design and architecture, at the 56th edition of the Salone del Mobile Milan, in collaboration with Abitare magazine.

The theme of Socially Responsible Design was chosen by organizers to reflect “an ambition to promote the role of design and creativity as agents of social and cultural change within the urban context.” With a population that has grown from 5.5 million in 1960 to 22 million today, the Mexican capital is constantly battling the urban challenges associated with rapid urbanization, including housing, mobility and sustainability.

Under this theme, Mexico City will play host to a full slate of world-class exhibitions, conferences, urban interventions and educational projects driven by four key objectives: generating opportunities, empowering civil society, preserving heritage and transforming respectfully. World Design Capital will give those in the design community a chance to voice their thoughts on the ever-changing megacity, and showcase their efforts toward building a more liveable, more international city.

Mexico City was chosen as the 2018 World Design Capital in 2015 following a competitive selection process to find a city to celebrate and showcase the positive use of design as an effective tool for economic, social and cultural development. It will be the first city in the Americas (and the sixth city overall) to hold the title, awarded biannually by the World Design Organization (formerly Icsid, International Council of Soci- eties of Industrial Design), an international non-governmental organization that promotes the profession of industrial design.

“Mexico City has a vibrant design scene, which has gained increased international attention over the last few years,” said Emilio Cabrero, General Director of Design Week Mexico / World Design Capital 2018. “Today, World Design Capital presents an opportunity to challenge and demonstrate our ability to use design solutions to address the social and urban challenges our city is facing. Coinciding with the 10th anniversary of Design Week Mexico, we are determined to create a moment for design professionals, creatives and the general public alike to come together and rethink the role of design in our society in an impactful way.”

An open call for applicants will be launched ahead of the World Design Capital 2018 that will offer up to 50 international design professionals the opportunity to work in Mexico City for a period of three weeks in June 2018. This residency program strives “to open up an international dialogue for participants to work on the practical implementation of projects addressing housing, mobility, public space and sustainability.”

It's official: Taipei has been selected as the 2016 World Design Capital (WDC). This doesn't come by surprise, as back in August they were the only city selected by International Council of Societies of Industrial Design (ICSID) to move onto the competition's final round. 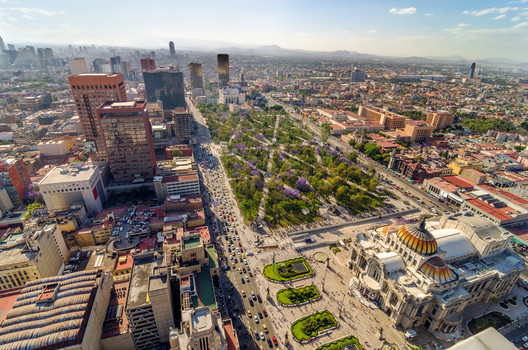