Nestled within the undulated roofline of one of Fitzroy’s famed MacRobertson warehouses, sits a roof terrace with a difference – complete with canopy and turf. This, the vertical and architectural pinnacle of the Butler House, fills the void that effects so many inner-city dwellings – a lack of outdoor space. Further to this, the warehouse apartment had a number of innate thermal and acoustic shortcomings – making it less-than-ideal for occupancy by a family with 2 rambunctious young boys. Balancing intimacy with privacy came to be a significant consideration for this young family and is achieved via shrewd adaptability of spaces. 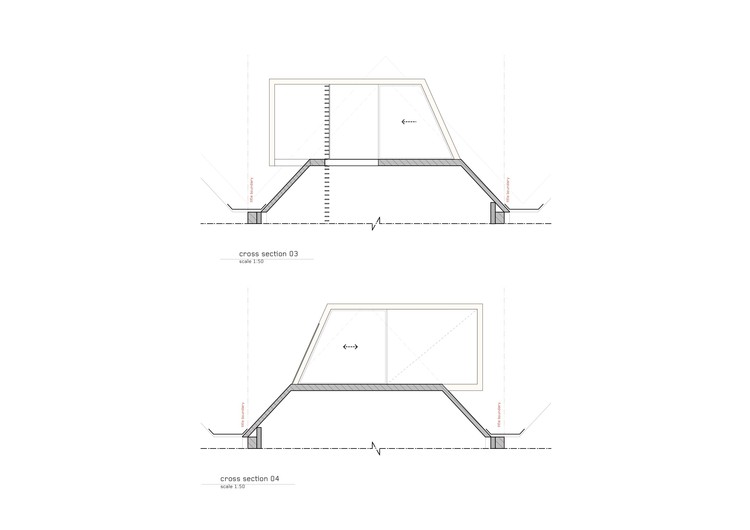 Unwanted sound transmission was something of a constant at the Butler House. A very open, vertical path of stairs allowed sounds to travel to all corners of the dwelling – their path helped by ubiquitous reflective surfaces in steel and concrete. The challenge was to reduce sound transmission, but not to a point of isolation – the family still very much enjoyed the connection allowed by cross-level communication. The solution was found in celebrating the very thing that made this house different – it’s vertical nature.

Where the roof pod sits, atop the vertical spine, it sits within the existing structure. The existing roof structure was simply cut at the collar-tie and refashioned in a manner, minimising steel use, to allow a bed for the roof pod – a bionic upgrade of sorts. The lifting of the roof allowed us to reveal the flesh, if you will, of the dwelling within. Sitting the pod within the roofline, as opposed to above, was imperative in maintaining engagement with the house below. This way, those cooking snags on the terrace can converse with those preparing salad in the kitchen. After site analysis, it became quite clear that neighboring roof terraces were being underutilized not only due to their increased exposure to sun and wind, but their spatial disconnection from the dwellings below.

The dark, Butynol clad roof of the pod responds in size and pitch to the neighbouring rooflines, but affords residual spaces to either end, open to the sky, with glimpses to the city skyline beyond. The turf covering is both practical and playful, bolstering tension against the adjacent corrugated tin. With doors wide open, the continuity of turf well and truly blurs and line between inside and out.

A trafficable glass floor on the roof, next to the spiral staircase, allows a visual connection and solar access to the living areas below. The effect of the newly- penetrated light throughout the three-storey apartment cannot be downplayed. Again, the adjustable louvres and blind help control the light admittance.

The existing mezzanine floor was somewhat of an acoustic pitfall within the house. Used primarily as a rumpus room for the children, it’s openness was at times detrimental. The challenge was to cordon off the space to use as a bedroom, without obstructing the all-important windows. The solution came in covering the gap between wall and floor in playful joinery, whilst a cavity to allow light and ventilation to the living room below. The joinery not only successfully dislocates the spaces, but becomes a bed, storage, robe and table. To the other side of the room, in-lieu of a dumb wall, oversized sliding doors offer acoustic and thermal isolation when needed.

The kitchen functioned – so it was kept. New overhead joinery was added for further storage and as a point of connection to the living space beyond. Incorporated was the new spiral staircase from above, tying it into the architecture of the space. The kitchen, which had previously felt shoved into the corner, was now defined and connected.

The Butler House was a tricky project to approach. The defined nature of the boundaries meant a creative approach had to be adopted in order to make the most of what was available. The result is an adaptable dwelling that will grow and alter over time, just as the family will.