Save
Office of the Evangelic Church / Exhibit Arhitectura
Share
Or
Copy 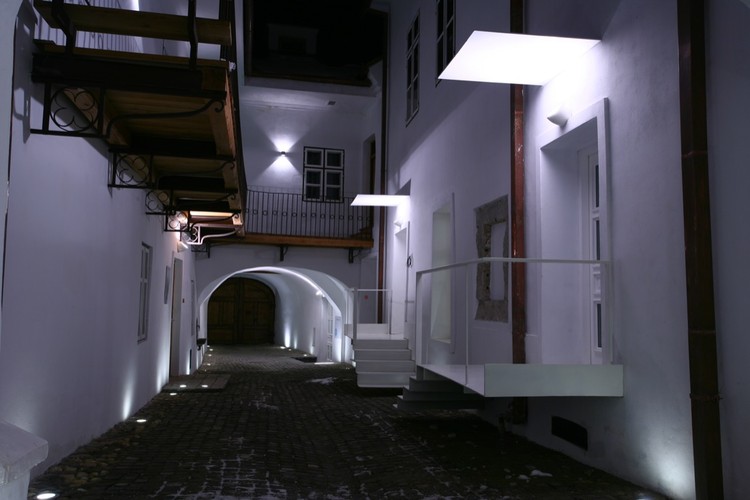 Located in the center of Brasov,Romania, in the vicinity of the Black Church, the house dates back to the 1st half of the 18th century and features three major construction phases along with other minor extensions and modifications.  The current facade cavities and outside ornaments were built in 1820.

The building changed its owners several times until it became the property of the Church at the beginning of the 20th century. It was then nationalized during the communist regime and retroceded to the Church after the 1989 revolution.  The restoration started in 2005 as the building was in an advanced stage of degradation, with various structural issues and severe deterioration of the architectural elements.

The initial theme was not very ambitious and was seen more as an attempt to save the house.  During the construction works (that lasted around 4 years), the beneficiary and the architects fell under the spell of the building so that the project evolved.

All the extensions and improper compartments were taken down. The valuable architectural elements were restored and given the deserved attention and value.

The additions and new insertions were designed to be easily recognized as contemporary elements enclosed to the old building.  The new carpentry respects the profilo and rules of composition of the existing elements, but were varnished in neutral colors, gray, white.  The staircases are made of metal or plastered stonework with a coat of white paint.

The planning was mostly done on site based on the discovered elements and the hints offered by the building.

Although the house has already been commissioned, it turned out to be the sort of project that is never thoroughly complete, with corners that are always ready to be embellished with another detail.