With the intention of framing a new cultural center within the iconic identity of Kaohsiung City, Taiwan, STL has designed a complex program that will revive the cultural atmosphere of the city for the Kaohsiung Competition which is to be submitted by January 10, 2011. More images and architect’s description after the break.

The Kaohsiung harbor is truly at the heart of the Kaohsiung urban landscape. Adjoined by the surrounding downtown areas, where the Taiwan Strait meets the love river, there is a critical opportunity to establish a new urban fabric as a fulcrum for the Asia-Pacific music culture and an international exchange platform for marine culture. The project presents a unique opportunity to impact a large area of Kaohsiung with an ambitious complex program. The challenge arises from the need to provide the new center with an iconic identity while allowing it to be an urban space of civic stature for the enjoyment of locals, tourists and concert goers. 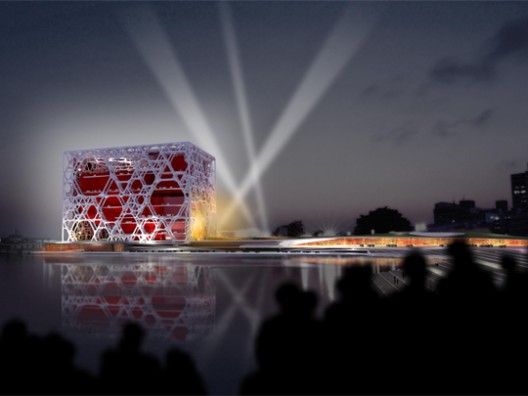 The ambition to provoke urban change can be understood as a desire to create a marine culture and pop music center that highlights the unique character of Kaohsiung city. STL envisions this reality as a coherent blend through an architectural landscape anchored by iconic venues that will satisfy the needs of locals, the industries and future trends. The importance of the perimeter urban fabric created by the buildings that surround the bay have prompted us to propose a plan that celebrates that existing reality and does not block its perception from the bay.

Both the music box and the landmark tower have been treated as two large iconic elements, that will frame the new center and provide the entire bay with a renewed and iconic identity. The volumes have been treated similarly to express intent of unison through the use of a double skin structural system. The structure resonates with the industrial, mercantile reality that surrounds the bay while offering a new expression of its engineering as a new symbol for Kaohsiung. The music box performance hall and the outdoor performance area complement one another: supporting the diversity of the Tai-Pop industry, the performance halls will also serve the televised entertainment industry while also welcoming events from classic theater. This state of the art venue has every opportunity to become a crown jewel for East Asian music and entertainment industry, with the capability to adapt to varying audience and event sizes.

The promenade along the park will become a new vibrant part of the city, energized by recreational and commercial activities around the bay. Whether drawn to the immaculate views offered by the observatory in the landmark tower; or the cultural attractions within the museum; or just for a leisurely stroll along the waterfront, the park area provides a multitude of activities to accommodate visitors during any time of the day and year.