"New Khmer Architecture and Japan" is the first show in Cambodian History to focus on the architectural drawings of its modern movement. Cambodia is a country with mature architectural culture, not only of the great Angkorian heritage and vernacular timber temples, but also of modern buildings from the 1950s and 60s known as New Khmer Architecture. Since the 1990s, in the context of the post-war redefinition of the national identity as well as the recent expansion of environmental consciousness, this Cambodian modern movement, with their sensibility to the traditional culture and tropical climate, is being re-evaluated; though the drawings and documents of the movement were believed to be destroyed and lost in the turmoil of the Civil War. 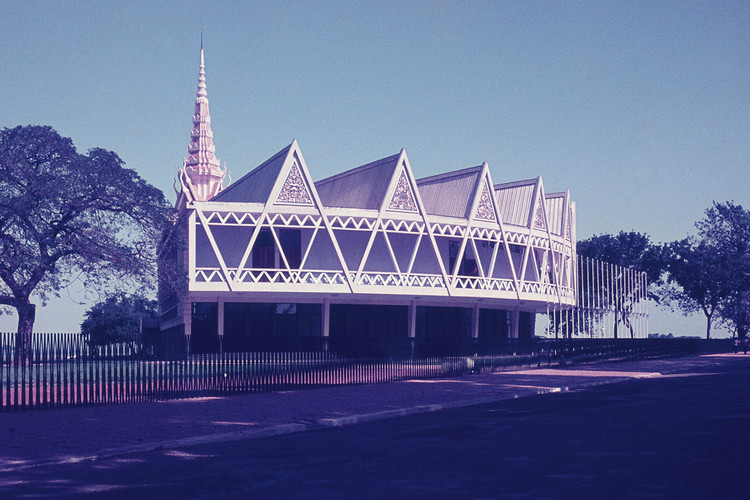 Against this backdrop, researchers recently discovered original drawings and documents which survived in Japan, including but not limited to the drawings of the masterpieces of Vann Molyvann, the central figure in the movement. Based on these drawings, the exhibition is aiming to showcase Cambodian-Japanese architectural collaboration in the 1950s and 60s. Cambodia and Japan have a lot in common, from Buddhist culture to a belief in Animism; and from the Monsoon climate to a tradition of timber construction. Cambodian modernists could adopt Japanese architectural culture, with the assistance of Japanese experts, to blend them with own architectural style. This Cambodian-Japanese connection is a key to open a new understanding and interpretation of New Khmer Architecture.

In addition to the reproduction of the original drawings, two new works are prepared for the exhibition: a special edition of the film "Beyond the Bridge" by Sotho Kulikar on the so-called "Japan Bridge" over the Tonle Sap River; and a 1/2 scaled model of the columns of the unbuilt Cambodian Parliament, designed by Vann Molyvann in 1958, reproduced through the interpretation of newly-discovered drawings.

The show is organized by the Environmental Design Global Hub, the new research and educational center at Kyushu University in Japan; co-organized by the Ministry of Culture and Fine Arts, the National Museum of Cambodia and The Japan Foundation Asia Center; and assisted by the Royal University of Fine Arts in Phnom Penh. Exhibits are from the Archives of: Obayashi Coprporation, Fuji-car, EXPO'70 Commemorative Park and Nobuo Goto.

A lecture by the curator and open discussion are scheduled on 4th March 2017, 4:30-6:00 pm.
To attend, please contact: eghub@design.kyushu-u.ac.jp