Athens-based Oiio Architecture Office shared with us their project ‘Architecture of Earth’, a library/cultural space in Ioannina for which they received first prize in a competition. More images and architect’s description after the break.

The site of the project is located in the center of city of Ioannina, Greece. The area is separated in upper and lower region, which leads to the zone by the lake. This intention of the city is remarkable and thus the project is oriented to (focuses on) the unification of the two regions.

The development of a new building is meant to integrate an already existing well-shaped cluster of public buildings, which aim at unifying the two regions. A public library with a reading room is selected to be the function of a new building, which will reinforce the effort of unification. The central reading room is to be located within the park, because of the need for isolation. Smooth slopes are seen in the area of the castle towards the lake.

The area where the site of the project is located hosts the remains of a part of the Ottoman fortification separating the city into two regions. The development of the building aims to the smooth unification of the two parts through its interaction with the landscape, the ottoman remains and the surrounding cluster of buildings.

The area is separated in an upper and lower region which leads to the area next to the lake. This intention of the city is remarkable and thus the project is directed to the unification of the two regions. The development of the building aims to complete the existing scattered cluster of public buildings which was settled at the old fortification area. Its function as a municipal library is able to attract a variety of social groups to an area whose former state used to separate the city. The building’s subterranean form provides the user with a variety of spaces including it’s roof which acts like a municipal park.

Building The building is located subterranean, with an orientation to the south. It attempts to be adapted to the natural landscape, defining however as well, the cluster of the buildings, which consists of new and old ones. With its arrangement, it tries to communicate with its surroundings, which refer not only to the natural landscape but also to memory. It concerns a subterranean building with two wings.

The southern wing looks like a fissure of the ground, forming the entrance. The northern wing consists of a ramp, which can take down the stroller smoothly, from the upper to the lower region, thus contributing to their unification.

The building is a socket in the ground. It is surrounded by solid earth. Therefore the library constitutes a high mass building, presenting all the benefits that derive from this quality. The element of water is integrated to the compositional context bringing its own qualities of microclimate and visual atmosphere. The old ottoman wall along with it’s glass encasement serves as thermal mass wall.

The use of the old stone wall associated with the glass encasement and the summer formation of waterfall creates a system of passive sustainable operation which covers 70% of the building’s energy demands. Therefore the building though low-tech comprehensible structures achieves energy efficiency to great extent.

The building follows the changes of the seasons using glass surfaces along the south façade which encase the stone wall of the fortification. During the winter this system becomes the main heating source of the building. During the summer the wall becomes the main source of passing cooling.The result of these systems is that there is no impact to the surrounding landscape from the operation of the building.

The familiar remains of the old fortification wall are integrated to the structures of passive heating and cooling system, providing the user with an educational opportunity about the operation of the building, through a redefinition of the city’s old monuments.

The building was designed to perform in ecologically sustainable way within opportunities and constraints of the local market natural materials such as wood and stone. The visual comfort is provided by the use of natural materials, the old stone wall as well as the quality of the water.

The sensitivity of architecture cannot afford to settle with its harmonious integration to the physical environment. Approaching, along with the physical, the built environment of historical inheritance, sustainable architecture is able to create a synergy that ties together ageless nature with distilled memory. 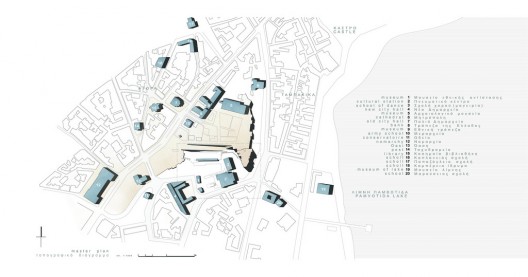 Winter Along the southern façade of the building lie a glass surfaces which are able to retain large amounts of solar radiation. The glass surfaces encase behind them an old stone wall of particularly high thermal mass. As soon as it assembles enough thermal mass the stone wall begins to release heat inside the space, which provides the building with the necessary access and source of light. This space eventually becomes a glass case of the old stone wall.

The warmth that has been created diffuses inside the rest of the composition, creating two parts. The space of the entrance, which is directly affected by the external environment, forming a device. A device that regulates the main space of the library in terms of temperature. The main space of the library, through the glass case, is indirectly affected by the change of seasons. The diffusion of the heated air is aided by a circumferential corridor that allows the air to flow, keeping a temperature of 13-15 degrees Celsius.

Summer The sun protection of the glass cases is ensured by light shades, aided by the internal ramps and the plantation of high trees alongside. Inside the glass case of the entrance a water fall is formed on the stone wall. The water fall creates a cool stream of air which diffuses in the space of the library affecting the internal microclimate. The circumferential corridor continuous to funnel air of stable temperature.