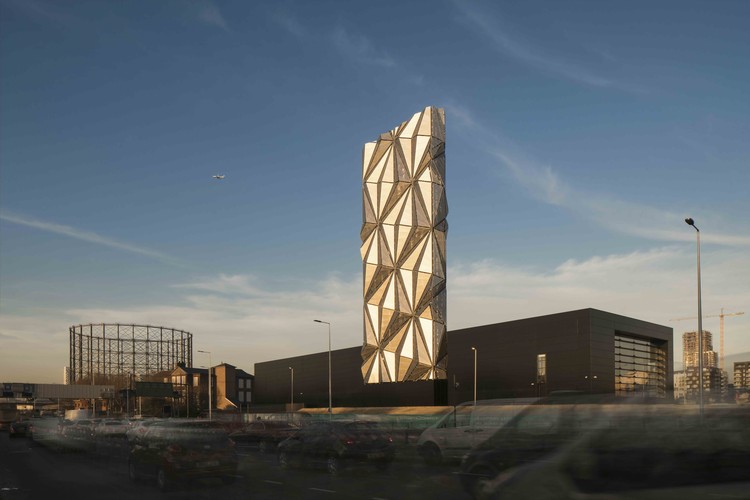 Text description provided by the architects. The Greenwich Peninsula is one of London’s major urban development areas, including 15,700 new homes, over 300,000 m2 of office space and the conversion of the former Millennium Dome into the indoor arena renamed The O2.

Responding to a cross-party drive to increase the use of Combined Heat & Power (CHP) across the UK and to realize a vision of decentralized energy power generation in London, the Greenwich Peninsula Low Carbon Energy Centre houses technically advanced boilers and CHP that provide heat energy to the businesses and homes due to be built on the Peninsula in the coming years and is part of the Peninsula’s Sustainability Strategy.

The Energy Centre is the largest new build residential heat network in Europe, saving over 20,000 tonnes of carbon every year.

The 3000 m2 Low Carbon Energy Centre, situated in a prominent location at the entrance to the peninsula, adjacent to the Blackwall Tunnel Approach, is a highly visible and important new landmark that demonstrates the applicants’ and stakeholders’ commitment to sustainable and affordable energy for all. Heat energy will be distributed via a District Heating Network (DHN) from the Energy Centre to each plot across the development.

Designed by British artist Conrad Shawcross, the cladding of the 49 metre high stack tower unites sophisticated engineering and complex optic research to create an impressive sculptural concept on a huge scale: The cladding for the structure is formed of hundreds of triangular panels that fold and flow across the surface of the tower forming complex geometric patterns that visually break up the flat planes to create an uneven, sculpted surface that plays with the vanishing points and perspective.

The panels are perforated so as to exploit the phenomena of the Moiré Effect, and at night an integrated lighting design produces a shifting series of ‘compositions‘ lit from within the structure.

Prepared for the future

To demystify the process of energy generation, the Energy Centre’s machine room and flexible ancillary office accommodation is supplemented with a Visitor Centre offering an interactive educational experience for prearranged groups of visitors. Construction started in 2015, and was completed in 2016. The building footprint further allows for flexibility in adopting new energy technology over the building’s substantial lifetime.

Simultaneously with the Energy Centre, C.F. Møller has also designed one of the new mixed tenure housing developments within the Greenwich Peninsula site for site-wide developer Knight Dragon. 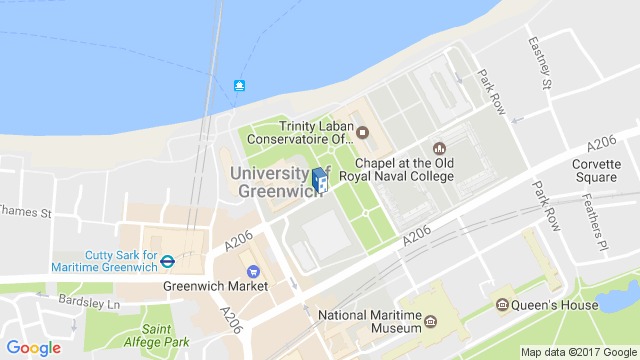 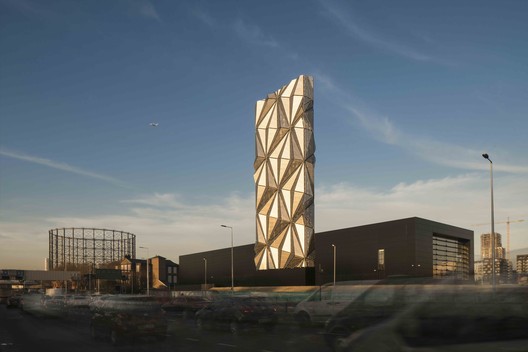