An eclectic stacked skyscraper may become downtown Los Angeles’ newest landmark. Designed by Gensler, the 52-story tower at 1600 South Figueroa would add to Central LA’s current development boom, contributing a mix of housing, retail, offices and a hotel to the area located near the Staples Center and LA Live Entertainment district.

Designed as a vertical neighborhood, the proposed project would consist of a stack of distinctly-finished masses separated by program type. The ground floor would contain 9,000 square feet of retail space, along with various lobbies connecting to different parts of the building. Office spaces would be located on the floors directly above the lobby, with a hotel (and accompanying 3,000 square foot restaurant) occupying the 5th through 18th floors.

Above the hotel, the building splits into several masses containing over 300 condominium and rental units. Bridging the two housing stacks would be a garden tier also holding residential units. Finally, the building would be capped off with several penthouse floors located within the sculptural appendage seen in the rendering. Planned amenities for residents include a rooftop pool and a fitness center.

The building’s siting and design are intended to allow the building to serve as a “gateway” to the city, Joel Miller, a representative for the project’s consulting engineering firm Psomas, told Curbed LA, with the the angled blocks of the second tier meant to look like a literal door or gate opening into Downtown.

A budget or timeline for construction has yet to be released. 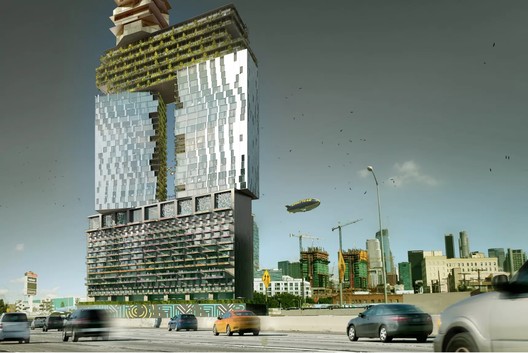