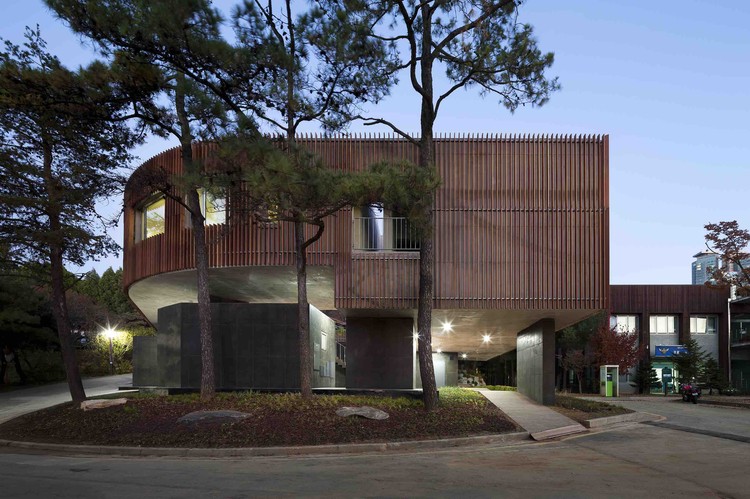 A Tail of The Hill

The building has such unique program and location. This facility is served as a place where the park janitors rest, wash and store cleaning tools at the same time. Boramae Park has small and large hills within the park. The site is located at the endpoint of one of those hills. The fan shaped area, which is about two-thirds of the site, is in contact with the road and the rest one-third touches the end of the hill. In fact, the site is in-between the last tail of the hill and the road. With the site given, the park required a shelter for the janitors and the storage for the equipment.

The rock and the branch

First, the initial design concept was to minimize the shape of the site, which results an arc-shaped mass along the road providing a shelter for the janitors. Then, the arc-shaped mass has been elevated from the ground in order to allow the flow of the hill into the inner courtyard of the building. The floating mass is supported by the several storage rooms rather than the columns. Since these storage rooms are the continuation of the land and should portray the rocks on the mountain, they are finished with black exposed concrete and are scattered randomly on the ground. The floating mass, a shelter for janitors, is treated with exposed concrete and layered with the vertical wooden louvers. The width of the wooden louvers are especially thin as the entire building illustrates an image of the rock - storage rooms on the ground - and the branch - floating shelter - in the mountain.

The main elevation of the building is about two-thirds of curved surface and one-third of straight line. As the road passes around this elevation, people who walks around the building would experience a visual variation with the wooden louvers arrayed throughout the curved surface. A slightly wide spacing of the louvers allows the observer a visual alteration depending on his or her viewpoint - the exposed concrete surface is much revealed from the front view and it is gradually concealed as the viewpoint changes. By walking around the site, the observer could capture the sequence of elevation in which the finishing material alters between the concrete and the wood.

While arranging the building on the site, preserving the existing four pine trees has been emerged as a critical issue. In order to minimize any harmful work to the nature, the building has been set back a few meters from the site boundary and doing so, one of the storage buildings has been digged into the hill. The hill then naturally continues to the terrace above the storage, which further connects to the courtyard. Consequently, the four pine trees has become the key elevation of the building, which enable a gentle flow from the outside hills to the inner courtyard.

The site is situated where the promenade starts. Furthermore, various circulations through the park is crossing around the site. In order to preserve the circulation flow, the main shelter has been built on pilotis whereas a few storages are dispersed on the ground floor. In doing so, the pedestrian path is fully reserved and also the generous open area below the facility could be used as a public space for special occasion. 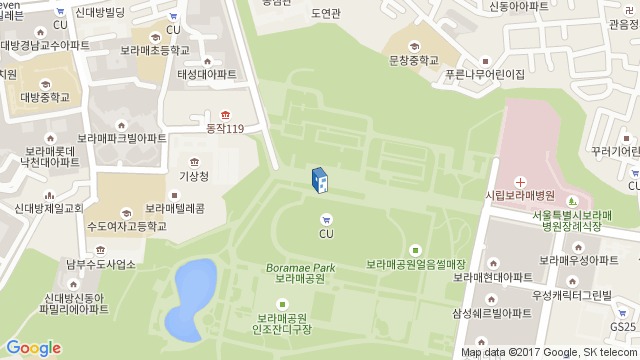 Location to be used only as a reference. It could indicate city/country but not exact address.
Share
Or
Copy
About this office
Hyunjoon Yoo Architects
Office
••• 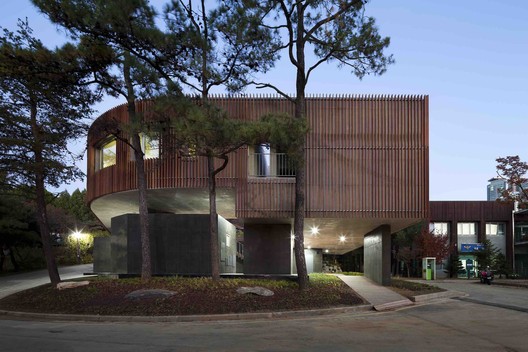