All
Projects
Products
Events
Competitions
Save
“Permanently Unfinished”: The Evolution of Architecture in the Galapagos Islands
Share
Or
Copy

The unique shapes of these pseudo-informal constructions are the product of a tax loophole found in many South American and even Southern European countries that allows residents and landlords to defer property taxes on buildings in the process of construction. (Another contributing factor to this practice is their residents’ existence in a liminal state of poverty.) The result is a strange, unintentional aesthetic of the purposefully incomplete that has a tendency to dominate many lower income neighborhoods. An especially large concentration of these building types can be found in the capital of the Galapagos, San Cristobal.

In leaving open the possibility of future construction, these semi-shelters invite the casual observer to imagine divergent possibilities for the completed construction that reflect an imagined future direction for the Galapagos Islands as a whole. Will the roofs of these homes become the penthouses of the wealthy Ecuadorians seeking a vacation home on the islands, high rise hotel towers to house the increasing flood of international tourists, or aviaries for accommodating the world-famous Galapagos finches, so as to integrate these birds into the matrix of human development?

Mapping the urban area of Puerto Baquerzio Moreno allows us to quantify the percentage of inhabitants that are actively taking advantage of this tax loophole. 1,800 buildings can be counted in Puerto Baquerzio Moreno from satellite photos. 1,253 buildings were surveyed from the ground in total: of those 960 appear to be mostly completed, 207 appear to be in a state of incomplete habitation, and 86 are apparently currently in construction. From that data, 76.5% are “completed,” 16.5% are “incomplete,” and 7% are “under construction.”

The somewhat larger and more developed Puerto Ayora on Santa Cruz suggests one possible path in which Puerto Baquerzio Moreno may develop. The survey of site statistics shows 2,925 buildings in the main city: of those 2,633 appear to be mostly completed, 233 appear to be in a state of incomplete habitation, and 59 are apparently currently in construction. From that data, 90% are “completed,” 8% are “incomplete,” and 2% are “under construction.”

Joseph Kennedy is a Fulbright grantee conducting research and teaching at the Oslo School of Architecture and Design. He graduated with a B. Arch from Cornell University in 2015. 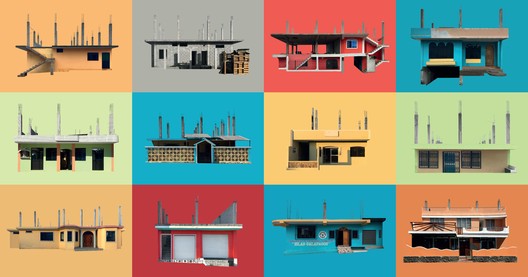