Save
"The Arrogance of Space": Mapping The Unfair Distribution of Public Space at Urban Intersections
Share
Or
Copy

Unequal distribution of public space when it comes to pedestrians, cyclists and people driving cars is an issue that urban mobility specialist Mikael Colville-Andersen calls "The Arrogance of Space."

The urban planner and founder of Copenhagenize believe that this term can be applied to streets that are dominated by traffic engineers from last century where streets were made primarily for cars.

To illustrate his position, Mikael analyzed the amount of space allocated to each of these groups, in addition to "dead space” and space for buildings, in the streets of Calgary, Paris, and Tokyo by comparing each sector using different colors.

Take a look at the findings below.

Looking down at the intersection of Quai Branly and Pont d'Iéna in Paris from above, we see the spaces for pedestrians, cyclists, and cars. It is color-coded, using red for automobiles, blue for pedestrians, yellow for buildings and purple for cyclists. It is obvious that motorists are the ones getting the square meters that should have been allocated to public space.

In addition, the gray areas referred to as "dead space”, could easily be given to cyclists and pedestrians.

Using the image of the same Paris intersection as an example, Colville-Andersen made a quick tally of the number of citizens in each sector of the public space categorized according to its use.

While this survey may not be 100% accurate, since the photograph wasn’t taken at a time that best represents the movement within the intersection, Mikael assures us that this tool shows us that the use of space doesn’t correlate to the demand.

In the case of the Canadian city, the founder of Copenhagenize states that although the picture was taken specifically of a parking lot, the ideal would be to see citizens in movement, a principle that is fulfilled in cities that are, to a certain extent, walkable.

At the busiest intersection in the world, Shibuya crossing in Tokyo, there are both pedestrians and cyclists. This is because there are several bike racks around the nearby the bus stops and by Shibuya Station.

Unlike the previous images, in Tokyo, we notice a slightly more equitable distribution of space, and since the crosswalks are diagonal, they give pedestrians more visibility in relation to the cars arriving from different directions. 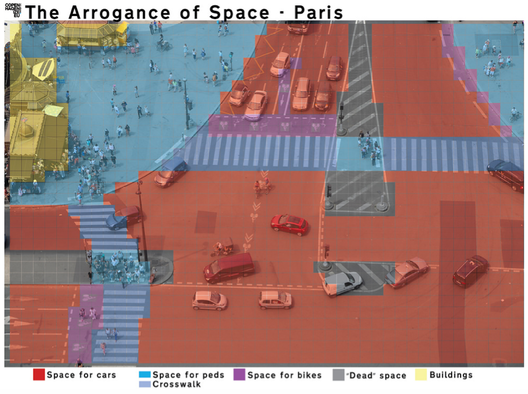