Ateliers Jean Nouvel and Australian firm Architectus’ 70-story mixed-use tower, 383 La Trobe Street, will be the newest addition to the Melbourne skyline, after its approval by the Victoria Department of Planning.

Upon completion, the building will be Nouvel’s first project in Melbourne and second in Australia following One Central Park in Sydney, which was named the Council on Tall Buildings and Urban Habitat (CTBUH) Best Tall Building Worldwide in 2014.

The 242 meter (827 foot) tower will feature a gridded facade with varying fenestration on each elevation – including the signature south facade, which has been inspired a curtain in Frank Lloyd Wright’s Hillside Theatre at Taliesin.

Inside, the tower will contain 488 apartment units and a 196-room hotel organized around four sky gardens. Approximately one third of the 2,850 square meter site will be designated for public space, containing galleries, restaurants, a bar, retail spaces and an internal arcade for digital art installations.

In addition, a book exchange library run in partnership with Victoria University will allow visitors and residents to borrow and donate books. 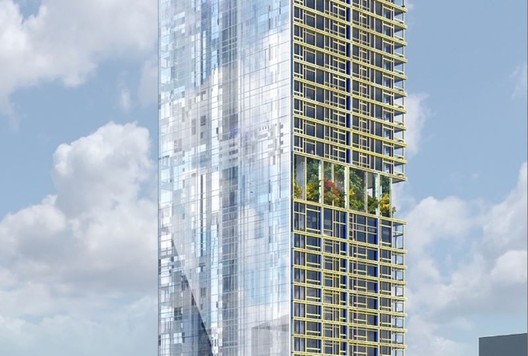