China-based firm EID Architecture has been selected as the winner of a design competition for a mixed-use development, entitled Longfor Phase IV, in Chongqing, China. Designed as an exploration of vertical urbanism on a high-density scope, the project is composed of a “single tower and associated podium integrated as an assembled massing of stacked box-like volumes.”

At 150 meters tall, the building will offer office space in its upper levels, and retail on its lower levels.

An “urban void” is created in the center of the project, where on lower levels, an open space acts as a “gravitational core,” around which the rest of the building organizes itself, “stimulating movement and activity through the vertical space that energizes and defines the associated programmatical components and offers a visual and spatial connection to the multi-level exterior terrain at ground level.”

On a design level, the project draws inspiration from the nearby countryside—with its natural karst formations— as well as from the surrounding city, where vernacular dwellings cascade down steep inclines in the city’s fabric.

“The outcome is a design that is both contextual and iconic, contextually integrated whilst unique in appearance that allows for a visual and spatial porosity and connectivity across all levels with a naturally balanced composition of stacked box-like volumes interlocked with a tower component, creating a design of understated monumentality and a harmonious contextually responsive composition,” said the architects in a press release.

In order to connect the East and West sides, the project will feature a terraced grand stair, which will additionally create ground level entrances at multiple levels.

Furthermore, the building will include garden terraces and a green wall within its lobby, in an effort to connect the space with the natural environment around it.

Longfor Phase IV is currently heading into the schematic design phase, and is expected to be completed in 2019.

The project was recently awarded an AIA HK merit award for unbuilt project. 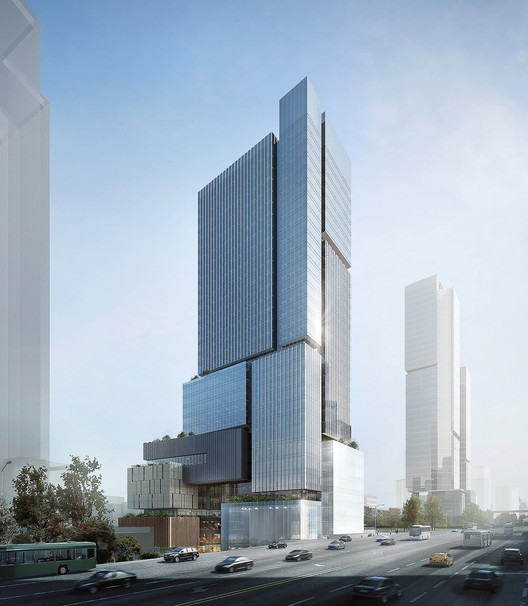