The Royal Incorporation of Architects in Scotland (RIAS) has announced Hugh Martin & Partners’ Princes Square as Scotland’s Building of the Century at the finale celebration of Scotland’s Festival of Architecture 2016 in Dundee. Open to buildings built in Scotland in the past 100 years, voters selected the winning building from a 10-strong shortlist that included projects by Enric Miralles and Reiach and Hall Architects. 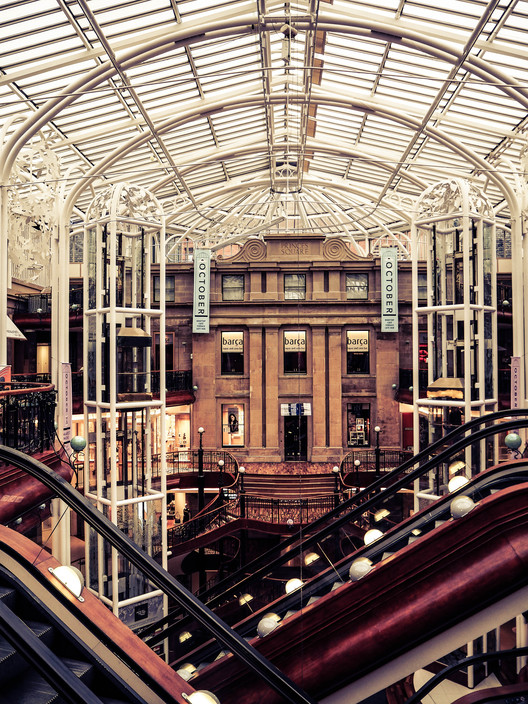 Located in the heart of Glasgow’s Style Mile, Princes Square was renovated into an iconic multi-level shopping center and public space by architects Hugh Martin & Partners in 1987, preserving and restoring the original building while creating a modern shopping and dining venue “of quality and distinction.”

Distinctive for its main entrance guarded by a giant metal peacock, the building features whimsical architectural elements throughout, such as symmetrical criss-cross escalators and spiral staircases, and is capped by a airy glass roof.

Hugh Martin & Martin have won numerous awards for the renovation, including the RIBA Scottish Regional Award for Architecture (1988), the Edinburgh Architectural Association Centenary Medal (1989), and a Civic Trust Award (1989).

The award was organized as part of the traveling Scotstyle exhibition, which has visited over 30 venues throughout Scotland, telling the stories of Scotland’s top 100 buildings of the past century.

“The Festival of Architecture has tapped into a keen public appetite for architecture and events on an architectural theme,” said Neil Baxter, RIAS Secretary and co-editor of Scotstyle. “With over 460 events and well over a million participants, it is the most substantial ever year-long celebration of a single art form in Scotland’s history. Princes Square is a worthy popular choice for the best building of the last 100 years.”

More information on the award and the Scotland Festival of Architecture 2016 can be found here.