Save
"Lost Utopias" Photographed by Jade Doskow
Share
Or
Copy

Since 2007, American photographer Jade Doskow has been documenting the remains of World’s Fair sites, once iconic global attractions that have often been repurposed for less noble aspirations or neglected and fallen into decay. Lost Utopias brings together the substantial body of work that Doskow has completed over the past decade, including iconic monuments such as the Seattle Space Needle, the Eiffel Tower, Brussels’ Palais des Expositions and New York’s Unisphere.

Doskow’s large-scale colour photographs poignantly illustrate the utopian architecture and art that has surrounded the World’s Fairs, across both the nineteenth and twentieth centuries. Presented in a handsome, large-scale hardback book, Doskow’s work carries a unique sense of both grandeur and dreaminess, whilst also reflecting upon the often temporary purposes that these structures once held.

Jade Doskow (b 1978, Pennsylvania) is an award-winning photographer based in Brooklyn, New York. She holds a BA in Philosophy of Art and Music from New York University and an MFA in Photography & Video from the School of Visual Arts. She is currently on the photography faculty of the School of Visual Arts and the International Center of Photography, and was named by 'American Photo' as 'One to Watch' in 2013. 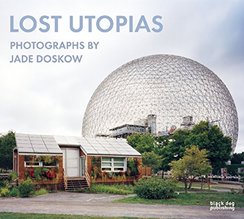