The October 2016 issue of a+u is a special issue devoted to Norwegian architect Carl-Viggo Hølmebakk. Since the establishment of his office in Oslo in 1992, Hølmebakk has worked closely with the natural landscape of the country. This issue features his latest National Tourist Route project "Vøringsfossen Waterfall Area", residential works "Summer House Addition Gravråk" and "Concrete House Holtet / Larsen", on-going projects such as "Bukkedauen Hotel and Coastal Culture Center" and "Torghatten Footbridge", as well as his earlier works from the very first built project "Private Library" for his parents.

The essays are written by Kyna Leski – Hølmebakk's classmate from Cooper Union in New York City and Professor at Rhode Island School of Design– and Martin Braathen – editor-in-chief of Norwegian magazine Arkitektnytt and architect himself. 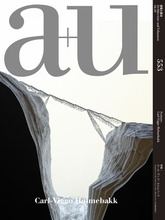