Save
Reflections on Architecture, Society and Politics: Social and Cultural Tectonics in the 21st Century
Share
Or
Copy

Each chapter explores the relationship between architecture and socio-political issues through discussion of architectural theories and projects, citing specific issues and themes that have led to, and will shape, the various aspects of the current and future built environment. Ranging from Chomsky’s examination of the US-Mexico border as the architecture of oppression to Robert A.M. Stern’s defence of projects for the Disney corporation and George W. Bush, this book places politics at the center of issues within contemporary architecture. 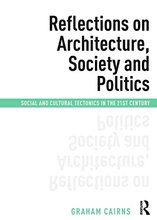 Reflections on Architecture, Society and Politics: Social and Cultural Tectonics in the 21st Century
Buy now
Buy from
amazon.com
Share
Or
Copy