Designer and architect Neri Oxman and the Mediated Matter group have announced their latest design project: the Synthetic Apiary. Aimed at combating the massive bee colony losses that have occurred in recent years, the Synthetic Apiary explores the possibility of constructing controlled, indoor environments that would allow honeybee populations to thrive year-round.

On Friday, September 30, 2016, the US Fish and Wildlife Service added seven species of bees to the Federal Endangered Species list, after a UN-sponsored report released in February found that nearly 40 percent of invertebrate pollinator species (which includes bees and butterflies) are now facing extinction. Bees play a vital role in the reproductive cycle of many plants, including those used for human food production, and according Mediated Matter, losses continuing at these rates could have dire impacts for both human and environmental well-being. 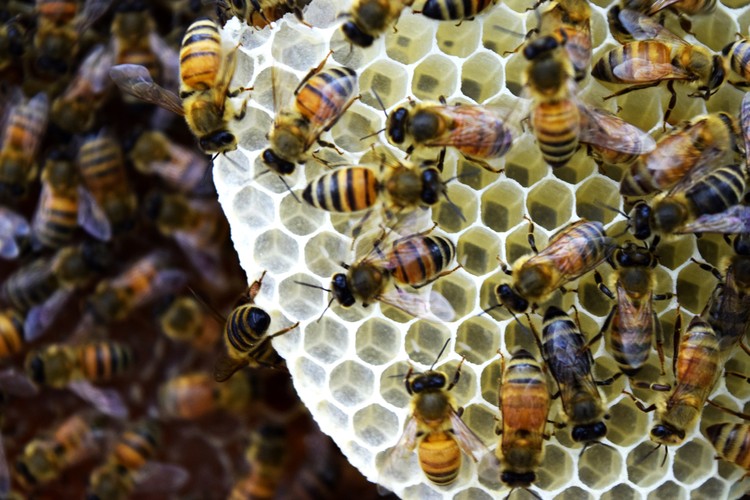 “It is time that the inclusion of apiaries—natural or synthetic—for this “keystone species” be considered a basic requirement of any sustainability program,” says Oxman.

In developing the Synthetic Apiary, Mediated Matter studied the habits and needs of honeybees, determining the precise amounts of light, humidity and temperature required to simulate a perpetual spring environment. They then engineered an undisturbed space where bees are provided with synthetic pollen and sugared water and could be evaluated regularly for health.

In the initial experiment, the honeybees’ natural cycle proved to adapt to the new environment, as the Queen was able to successfully lay eggs in the apiary. The bees showed the ability to function normally in the environment, suggesting that natural cultivation in artificial spaces may be possible across scales, “from organism- to building-scale.”

“At the core of this project is the creation of an entirely synthetic environment enabling controlled, large-scale investigations of hives,” explain the designers.

“As shown in the video at time 2:33, eggs are laid in the apiary, indicating a successful combination of temperature, humidity, light, and nutrition for queens. This proves the ability to shift the entire cycle of bee behavior, out of winter mode and into spring mode, and is a first demonstration of sustainable life in a completely synthetic apiary. The long-term goal is to integrate biology into a new kind of architectural environment, and thereby the city, for the benefit of humans and eusocial organisms.”

Mediated Matter chose to research into honeybees not just because of their recent loss of habitat, but also because of their ability to work together to create their own architecture, a topic the group has explored in their ongoing research on biologically augmented digital fabrication, including employing silkworms to create objects and environments at product, architectural, and possibly urban, scales.

“Honeybees are ideal model organisms because of the historical interplay between their communities and humans.”

With the success of the initial Synthetic Apiary program, Mediated Matter hopes that biological environments will begin to be regularly integrated into architectural and urban settings, for the benefit of both humans and eusocial organisms such as bees.

The Synthetic Apiary team wishes to convey gratitude to Mori Building Company for their generous sponsorship of this project, as well as acknowledge the Mori Art Museum and Loftworks for their support.