The MIT School of Architecture’s Self-Assembly Lab has teamed up with Google to create Transformable Meeting Spaces, a project that utilizes woven structure research in wood and fiberglass pods that descend from the ceiling, transforming a large space into a smaller one. Designed as a small-scale intervention for reconfiguring open office plans—which “have been shown to decrease productivity due to noise and privacy challenges”—the pods require no electromechanical systems to function, but rather employ a flexible skeleton and counterweight to change shape.

This skeleton is composed of 36 fiberglass rods, which are woven together into a sort of textile or cylindrical braid. Thus, the structure behaves “like a Chinese finger trap: The circumference of the pod shrinks when it’s pulled, and expends when relaxed.” 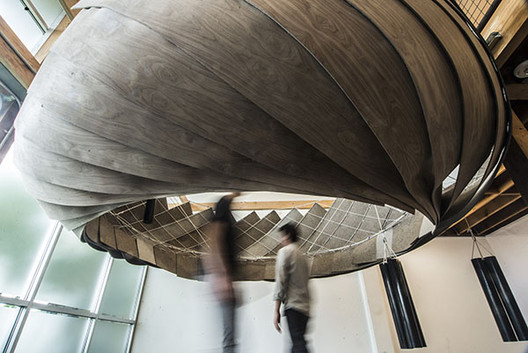 Expanded fully, the pods measure about ten feet in diameter and eight feet tall, providing space for up to eight people to either sit or stand inside.

Furthermore, the inside of the spaces are lined with felt, so as to dampen outside noise.

We’ve had four people sitting in there at tables, or standing in there for a meeting, said MIT Self-Assembly Lab’s co-director, Skylar Tibbits. We also thought it could be a sort of nap pod. It’s more about the transformation of space rather than trying to present what happens in that space. We’re just trying to create different capabilities.

Research on the project is ongoing, and in the future, will be concentrated on applying these transformable materials to larger-scale architectural practice, for instance in retractable stadium roofs. With such technology, the Lab hopes that stadium roofs or even stadiums themselves, among other systems, could be collapsed after use without major disturbances to the urban landscape.

News via Fast Company Design and the MIT Self-Assembly Lab.