Read more
Save
Modern Regionalism: The Architecture of Sarbjit Bahga
Share
Or
Copy

"MODERN REGIONALISM: The architecture of Sarbjit Bahga" is a monograph on the selected works of Indian architect Sarbjit Bahga. He has more than three-and-a-half decades of practical experience in designing of various types of buildings, complexes and large campuses. His completed works include an eclectic and impressive range of administrative, recreational, educational, medical, residential, commercial and agricultural buildings. His building designs are innovative and responsive to function, climate and materials. He is a staunch modernist and an ardent, yet not blind, admirer of Le Corbusier, Pierre Jeanneret and Louis Kahn.

He is three-time recipient of the World Architecture Community Awards. His name has been featured in the Guinness Book of World Records for designing the “longest covered concrete corridor” in Vidya Sagar Institute of Mental Health, Amritsar.
The main focus of this book is to present a few selected works of the architect which portray his prolific approach to the designs of the diverse range of building types. Of more than 200 projects he has designed, only 54 have been included in this treatise. These projects have been subdivided into seven categories i.e., Office Buildings, Recreational Buildings, Educational Buildings, Healthcare Buildings, Residential Buildings, Public Infrastructure, and Agricultural Buildings. These projects cover a vast range of scale from a tiny house and office building to sprawling campuses. Irrespective of their scale, these projects portray the accumulated design philosophy of the architect which has been elaborated in detail in the second chapter, “About the Architect”.

The first chapter of the book titled, “Metamorphosis of Architecture in Post-Independent India” dwells on the transition, development and transformation of modern Indian architecture since 1947. The projects included in the next seven chapters have been explained both objectively and subjectively, and well-illustrated with photographs and drawings which are uniformly drawn in a minimalist manner. The last chapter titled “Biography”, is a brief description of the architect’s life, works, achievements, awards, honours, and publications.

The book is authored by Supreet Singh Bahga, a Doctorate from Stanford University, USA, and Assistant Professor at Indian Institute of Technology (IIT) Delhi. Christopher Charles Benninger, a renowned American-Indian architect/planner, and alumnus of MIT, and Harvard University, USA, has written the foreword essay, "In Search of an Indian Architecture: Modern Regionalism." 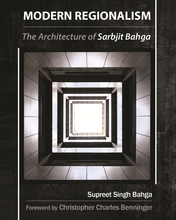