Kaldor Public Art Projects, in collaboration with artist Jonathan Jones, has created barrangal dyara (skin and bones), the first Kaldor Public Art project to be produced together with an Aboriginal artist in the Royal Botanic Garden of Sydney, Australia. Inspired by the history of the 19th century Garden Palace building, which originally stood in the Royal Botanic Garden from 1879 to 1882 before burning to the ground, the artwork marks the original footprint of the building with a sculptural installation of 15,000 white shields spanning 20,000 square meters.

Where the Garden Palace’s dome once crowned the city, a dynamic meadow of kangaroo grass now disrupts the garden’s formal European design.

Eight Aboriginal language soundscapes, which were developed with communities throughout south-east Australia, are installed throughout the site. 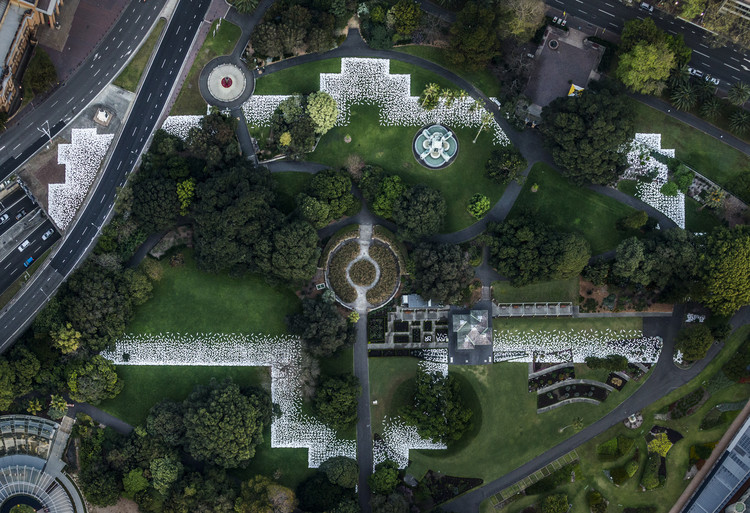 barrangal dyara is a response to the immense loss felt throughout Australia due to the destruction of countless culturally significant Aboriginal objects when the Palace was razed by fire on 22 September 1882. It represents an effort to commence a healing process and a celebration of the survival of the world’s oldest living culture despite this traumatic event, said artist Jonathan Jones.

The thousands of shields laid across the Garden echo the masses of rubble left over after the fire, raising the bones of the Garden Palace for a contemporary audience. Each shield takes its shape from one of four typical shield designs from the south-east of Australia and speak to not only the significant number of cultural objects lost in the Garden Palace fire, but also the presence of objects on this site, used in ceremonies over countless generations.

Visitors will be able to enhance their experience by downloading the free Project 32 app, which provides insights from cultural leaders, historians, theorists, artists, writers, and cultural practitioners.