CannonDesign and NEUF architect(e)s have unveiled the design for the Centre Hospitalier de l’Université de Montréal (CHUM), the largest healthcare construction project in North America and one of the largest current healthcare projects in the world, which has been in the works for almost a decade.

Spanning over 3 million square feet, the 22-story complex will merge three aging hospitals into one, creating a space with 772 single-bed patient rooms, 39 operating theaters, and more than 400 clinics and examination rooms. 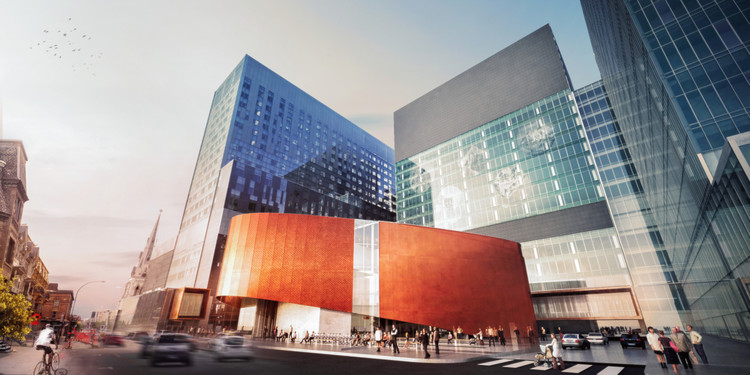 Through this first phase, the hospital’s core capabilities will become available, including all patient rooms, operating theaters, diagnostic and therapeutics, as well as the oncology program, thus leaving offices, a conference center, and ambulatory spaces for Phase 2.

In order to break down the massive scale of the project, a public space component has been interwoven into the design to make it as open, transparent, and welcoming as possible. “Our team recognized the importance of creating a human experience that draws people in, to interact with the building in a variety of ways, without it feeling overbearing to visitors and patients. We wanted to completely redefine Montrealers’ image of what a hospital feels like” said Azad Chichmanian, partner, and architect with NEUF architect(e)s.

The new CHUM campus will feature 13 large-scale works of art, far surpassing the Quebec government’s requirement of dedicating a minimum of 1% of a public development’s budget to the integration of art. Through these artworks, the hospital seeks to provide a “more human” experience for visitors and staff.

CHUM has already won several awards, including an A' Design Award in Italy, recognition at the Healthcare Design Forum in London, and a position as a finalist for the World Architecture Festival to be held in Berlin in November.