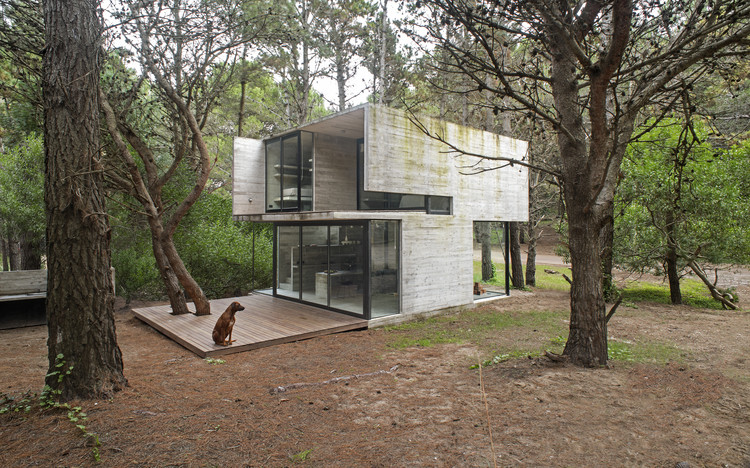 In a modest, 210 square meter plot of land on a corner, eight blocks away from the sea, rises H3, a minimum tread house designed to make the most of the parcel’s dimensions and the natural surroundings.

The commissioner: 3 sisters and each of their families.

Even though their budget was limited, they we valued ability to express what they wished H3 should be: their shared summer house, their own place to rest amid nature.

They requested that the house’s dimensions should be defined very rigorously. The brief should comprise a predominant social area and a more private one, constituted by two bedrooms: an ample master bedroom and a smaller cabin-like one, both sharing a common bathroom. They wanted the master bedroom to open up outwards into a semi-covered outside area. Also, they expressed their desire for a salamander to be placed at the heart of the house.

The house’s materiality was agreed on by the studio and the commissioners. H3 was completely built in exposed concrete, which served well to the maintenance moderation. Intending to keep the needs for equipment at a minimum, even furniture was conceived as a part of the concrete volume.

Pine planks were used to set the formwork so that the partitions as well as the slabs would preserve the texture of the wood veins in an attempt to establish a harmonious dialogue with the bark of the local trees.

The house was constituted as a compact block. The ground floor houses the kitchen, the dining room and the living room, all in an integrated space from which the staircase emerges towards the first floor. Given the house’s scale, the use of crossed views and vanishing points aimed at unifying and fluidifying the space in the room. Instead of confining the house’s different uses into separated rooms, they have been connected with each other, aiming at producing the general feeling of spatial expansion. As requested on the brief, the bedrooms and the bathroom were located upstairs, but the main bedroom’s outdoor semi-covered space was designed to be shared with the secondary bedroom. Additionally, it would partially work as the roof for the downstairs deck.

As the corridor and the serving facilities were set to the side next to the neighboring lot, the main windows were set on the house’s more private rear, allowing the dwelling to open towards the outside deck and calling for the conservation of the original trees.

On account of the abundant shadows provided by the profusion of the woods, there was no need to reach for architectonic devices to reduce the sun’s incidence inside. As a matter of fact, apart from connecting the house interior and gaining visuals, the windows of the house also absorb the light that dribbles through the dense canopy of the trees.

Overhangs and partitions preserve the house both from the effects of water and the sight from the streets.

Also, the volume housing the bathroom shelters the entrance to the house.

While the sidewalls are mainly blind, the front upstairs show the blind volume housing the bathroom and the high windows of the main bedroom, under which a storeroom lies inside. On the rear, floor-to-ceiling windows connect both windows with the outdoor deck they share.

Unlike what happens upstairs, floor-to-ceiling windows open the ground floor from its entrance towards the opposite side. When we designed this floor plan, we aimed at making it feel both like an indoor space, sheltered by the roof and the windows, but at the same time, somewhere in between in a continuum with the outside.

In this way, the layout of the house is the result of an architectural synthesis of the sisters’ intentions and desires. In its minimum scale, the house rises by its own will, but also integrates itself respectfully with its surroundings, both natural and human-built.