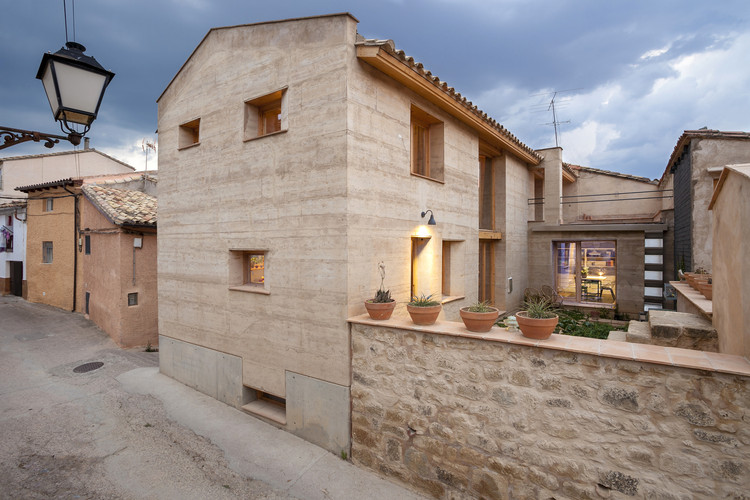 Text description provided by the architects. This modern rammed earth house, winner of the international prize for contemporary earthen architectures Terra Award 2016, is located in Ayerbe, a little village in the Spanish Pyrenees. Rural migration in the region during middle 20th century led to the disappearance of traditional architecture techniques. This house attempts to awaken the interest of the community and the curiosity about this type of sustainable buildings that are strongly linked to the territory. The project has been inspired by old local earthen buildings regarding their orientation, morphology and the use of local materials.

A life cycle analysis has shown a 50% reduction of CO2 emissions. Local materials like stone, earth and straw represent 80% of the weight of the building. Hydraulic lime, roof tiles, wood and sheep's wool have also been used, obtained from an area within 150 km radius. The house includes passive solar strategies as windows specially designed for an efficient use of natural light, thermo-insulating blinds, cistern for reutilization of rain water, thermal accumulator clay plastering, biomass heating boiler, etc.

With her own home design, the architect has tested all techniques and materials to their limits in order to achieve not only a natural and sustainable house, but also an energy efficient, environmentally and socially engaged building.

The passive solar design used is also allowing research work focused on the thermal behavior of the earthen walls according to their position, as well as the study of a sample of a trombe wall.

The site is within the town, has a rectangular shape with its long side facing the north. The surrounding buildings use one or another earth construction technique (adobe, rammed earth and mixed stone building techniques). The house adapts to the street levels and is built in three floors.

In winter, heat is stored in earthen walls during the day and it’s transmitted to the interior spaces throughout the night. In summer shadow systems as eaves, wooden curtains prevent the light access to the interior of the house.

Upper floors are built in 45cm thick earthen walls and timber decks support the housing spaces. Earth selection was objective and was tested in laboratory.  A discontinuous sedimentation test and a screening test were made in order to know lime, sand and gravel’s proportions. It was also made a carbonates test to quantify the carbonates proportions contained in the sample. Straw fivers were added to the mixture to increase thermal and shrinkage qualities. The interior and exterior lime plaster was built using the “calicostrado” vernacular technique. Wooden work form used was a standardized system and was mounted continuous and simultaneously fitting it immediately before the filling. The construction process was mechanized to improve execution and economical performance. The mixture, the elevation and the pouring were made by a single machine. The compression was made by hand with an electric compressor.

Coverings of interior partitions were made by local clay plasters. The roof is isolated with 20cm of sheep’s wool in order to avoid thermal loss during winter and overheating in summer. Inner wooden floors are isolated with natural cork boards.

Pinewood carpentry has double glazing with internal air chamber. Windows opened to north and west facades have interior wooden shutters.  South windows have heavy interior curtains and roller exterior wooden shutters to manage shadows. Both strategies are the traditional ones for each orientation, adapted to local climate and it’s management is known by users.

A cistern for reutilization of rain water is buried in the patio. A biomass heating boiler heats the house and produces hot water needed. 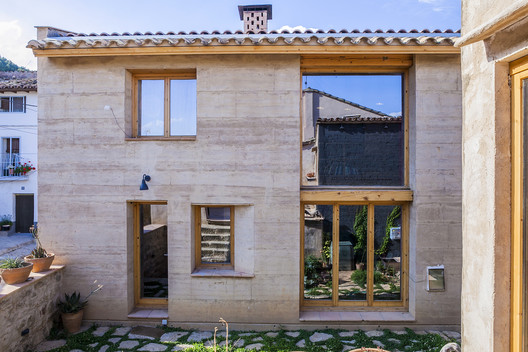