Rolka Studio have unveiled their winning proposal for the Mevaseret Zion Conservatory in Israel. A joint venture of the local council of Mevaseret Zion, the Israeli Architects Association and the Musicon Association, the competition sought a design that integrated the urban and natural borders of the site with the unique musical program. The judges commented that it was Rolka Studios' interrogation of the "relationship between the creator and nature, between performance and landscape, sound and topography" that made their proposal stand out from the 85 entries. 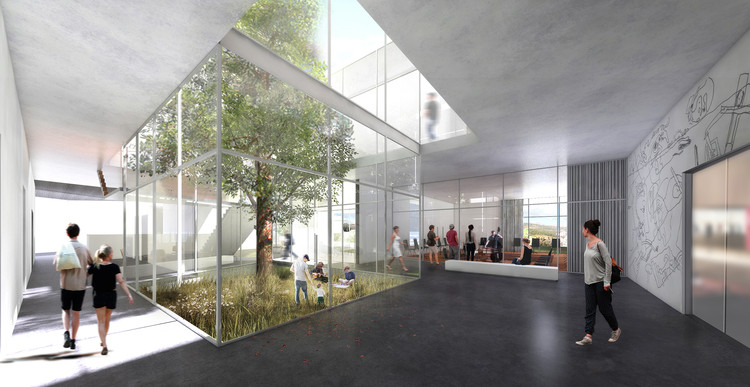 The building sits at the junction of three different types of public space; continuous urban public space on the north, Hare'el nature park, and a smaller scale neighborhood public space to the south. Despite these natural borders, the site is centrally located within Mevaseret Zion city, and this position required consideration of its public presence as a landmark and urban square.

Within the urban grain of Mevaseret Zion city, the neighborhoods are penetrated by 'green valleys'. In reference to this, the back side of the conservatory opens up towards the open nature, bringing the landscape into the building. A scenic path passes through the building and connects the urban square and the natural valley, enabling the passage of hikers and pedestrians. In contrast, the continuous front facade presents a distinctly urban condition and forms the bounding wall of a public square to its forefront.

The building is hedged upon the unique musical values of the program, which includes a concert hall, a variety of learning and performance spaces, choir and orchestra practice rooms and a dance center. The architectural language is based on the attempt to connect this musical theme into the existing landscape, and the need for differentiation in the floor plan between public and private zones.

The learning spaces and common music practice rooms are organized in adjacency to the public areas of the building, providing users a nature passageway with rotating performances. Separate entrances allow the auditorium, dance center and the rock rooms privacy from the visiting crowd, as they operate separately from the rest of the building. The private learning spaces are located on the outskirts of the project, with open and direct views to the existing landscape.

The design of the ground floor respectfully references the traces of old buildings and natural features on the site and its close surroundings. Following the flow of the topography as a Greek village would, the lower floor is folded into the ground, hiding it from street view. Thus the building appears as a set of white floating boxes, a set of portals to view outwards and inwards.

In a press release, the architect describes how the architectural language creates a delicate balance between an object or an icon and a "soft" structure that fits its natural environment. The project offers a flexible set of options for teachers and students of the music center in one hand a building which acts as a stage for presenting music to the city, and on the other hand, quality private learning environment with a close connection to nature.

For an alternate response to the competition brief, check out Neuman Hayner Architects proposal. 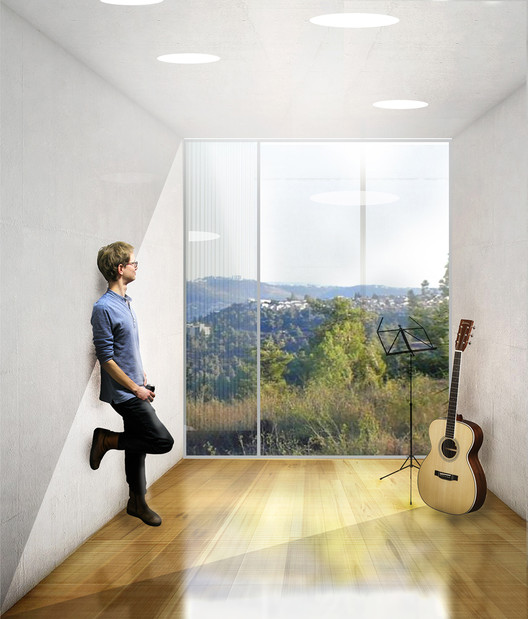