When posed with a brief for a Japanese-style mobile fashion store, Kooo Architects decided not to respond in a purely visual symbolic way. Rather, they looked at the climate for constructing architecture in Japan, and decided to raise social awareness of the destructive power of earthquakes. Using approximately 1000 disaster hoods to create an 8m diameter partial dome, their design embodies the color and texture of their client's fashion range while reminding the public of the prevalence of natural disasters.

The hoods themselves, also known as bousai zukin, are commonplace in Japanese schools to protect children's heads from fire and debris in the case of earthquakes. The structure is easy to assemble, with convenient workability as critical design features. The hoods are self-supporting and no rigid structural material was used, but rather a soft and highly cushioned material called Breathair. The hoods are connected by waterproof zippers and magnets, piling up to create the lightweight frame structure.

Whilst the feasibility of such a lightweight structure could be questioned, it's structural integrity has been proven through testing and iterations. The lower hoods support those stacked above, and the thickness and density of the air pressurized material increases with the addition of more hoods. Transparent acrylic rods are added inside the hoods to reinforce the structure, and different layers of the padding and lining have corresponding intensity adjustment.

Based in Tokyo and Shanghai, the founders of Kooo Architects have both previously worked for Kengo Kuma, a practice who have become synonymous with technically innovative designs. His recent carbon fibre project takes a different approach to the ongoing issue of earthquakes in Japan, by literally tying the building to the ground. Similarly, Kooo wanted to highlight the immovable challenge that the construction industry in Japan has to face, whilst also reminding individuals to be prepared for the worst.

Their client, a fashion designer with an interest in social contribution, was quick to facilitate Kooo's approach. The printed graphics on the hoods replicate the client's signature textile patterns. The semi-opaque material allows light to filter through, creating a multi-colored internal sphere. Kooo Architects said, "After the dismantlement of this pavilion in the future, the hoods will be donated to other earthquake-prone countries, raising the awareness of disaster prevention, thus, achieving the requirement from the owner of making a 'Japanese design."

The store is due for completion by the end of 2017. 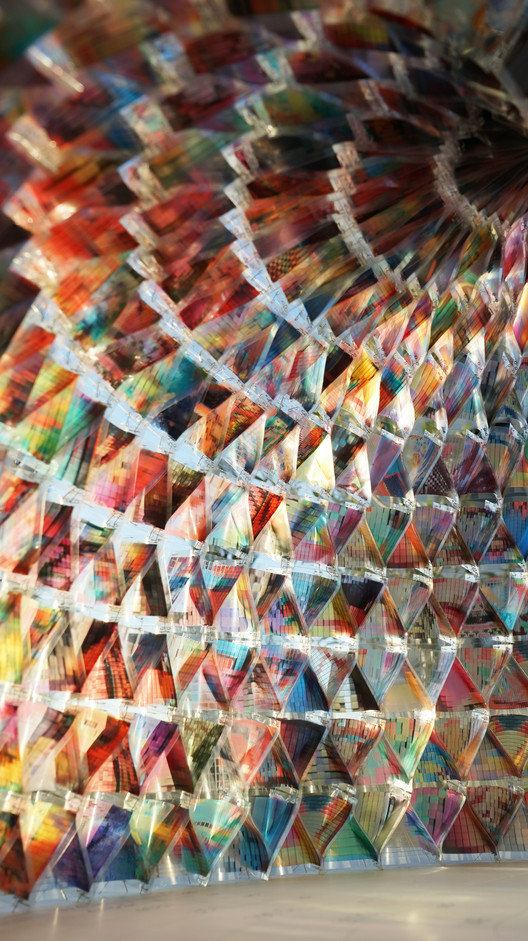