Read more
Save
Project of the Month: Estonian National Museum

For the last three centuries, museums -as an architectural typology- have transitioned from being an important node in the city to becoming an icon of identity for a whole culture. Museums have transformed into a civic landmark in a local and international scale.

This month we highlight the Estonian National Museum which not only proposes a strategy for meeting spaces and exhibition, but also stands as a cultural, historic and territorial recognition of the country. Placed as an extension of the ruins of an old aeronautical field used during the Soviet occupation, the museum contrasts it’s historic context with a new building that rises as the projection to a new reality and a national future.

The proposal is located in a former aeronautical Soviet field with the purpose to recover this unoccupied space and expose it as part of the national memory. Considering the features that the territory offers, an extension of the field is proposed taking advantage of it’s scale, achieving a space that hosts several cultural activities and a new use for the territory that contrasts with the existing. All this with the purpose of projecting a new reality and desire of a great national future.

These ideas are formally embodied as a large inclined roof ranging from 3 meters to 14 meters high. This structure connects the two main accesses that link symbolically the “new” with the “old” and at the same time leaving a free view to the interior so that the users can fully understand the length and scale of the building.

The choice of materials as enhancement of the climate and the national landscape.

The outer skin of the building was designed as translucent layers that maintain constant connection with the surrounding landscape. The glass facade protects from the rain, snow and extreme weather conditions. This is achieved with three layers of glass that regulate the temperature and allows the direct sunlight inside through the building’s south facade where the exhibition halls and the sheltered spaces are located. The curtain wall acts as a rain cover that conforms to the facade giving a sculptural feature to the traditional Estonian patterns and at the same time integrating the landscape environment as a constant in the territory and context.

The dimensions of the museum based on flexible use in the future.

The challenge for the architects was not only to contribute with a design for a new museum, but to give the community a space with all the attributes of a museum of the 21st Century, considering it not only as a storage and exhibition space but also a place for social interaction and cultural recognition, remembering that it was a lost space transformed into a series of public spaces.

From the architect. During the nineteenth century Estonia experienced an 'age of awakening' with the spread of a national consciousness and the establishment of Estonian language literature, theatre and professional music, as well as the formation of the Estonian national identity. 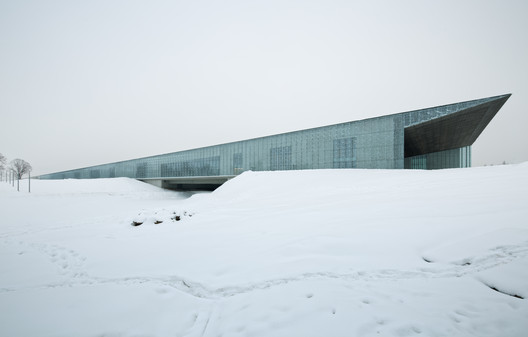