A new fencing system uses the same tried and tested hardware as a standard sliding gate, but with a twist; the vertically operable slats sink into the ground in less than five seconds, disappearing completely. The Fancy Fence was created to streamline accessibility, while also improving the visual bulk of traditional fences by removing all horizontal elements. The system can be installed in an infinite number of configurations and incorporates elegantly designed fixed slats, the retractable gate and an "invisible" walkway gate.

The Fancy Fence's vertical mechanism reduces the overall footprint needed for sliding or swinging gates, meaning that the space adjacent to the fence can be fully functional. The invisible walkway gate retains a hinged joint for quick pedestrian access. The entire system can be installed in less than 24 hours, and allows for a fully customized arrangement. The fencing elements are available in a range of sizes and finishes, some of which are visible in the gallery below.

Fancy Fence was developed with safety and security in mind, using entirely prefabricated, standard components that have undergone years of testing. The mechanical elements of the fence are operable year-round, with built-in contingencies for extreme weather such as flooding or snowing. The retractable gate uses the same sensor technology as sliding gates, and will only rise if the area above the gate is completely clear. Despite its mechanical functionality, the system can still be used during power outages through an emergency manual operating system that is light enough to be engaged by children, as seen in the video below.

For more information, check out the Fancy Fence website. 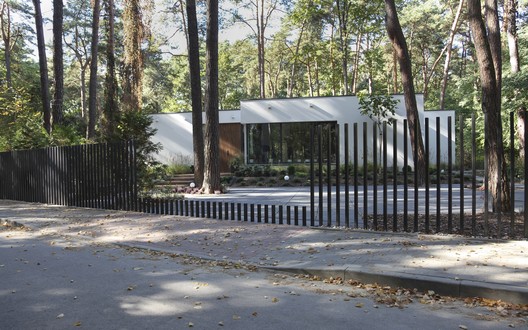