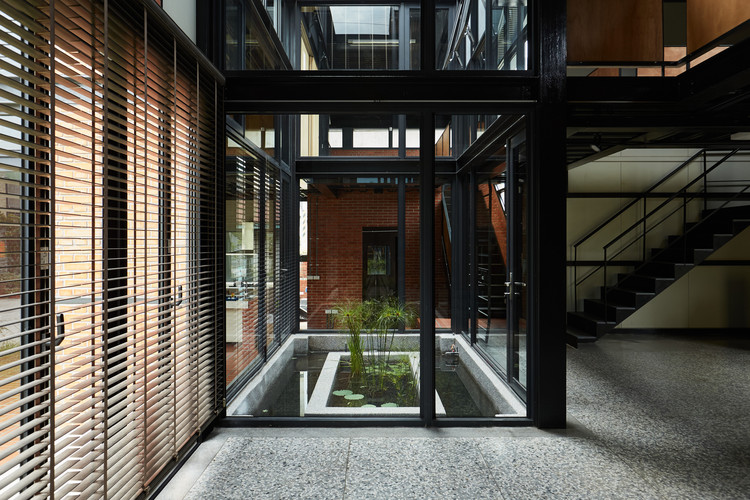 Text description provided by the architects. The ''SPRING HOUSE'' is located in Guiren Tainan, and surrounded by farms, Taiwan traditional house with courtyard, high way and high speed rail.

1.The design combines the client's unique personal living space and the temporary living space for her special friends.
2.Combining the steel , bricks, concrete and metal plates to form the framework of traditional architecture and spatial order as a starting point to reinterpret modern residential construction.
3. Echo the surrounding environment , with an open attitude in the face near the neighbor's courtyard and house, defensive posture to face the high-speed road and rail .
4. Using rainwater recycling and solar power and other systems to enhance the sustainability of the building.

Background:
The house is located in Tainan Taiwan, owned by a female entrepreneurs. Half of the land was originally a traditional courtyard house , and surrounded by two roads ; west side: Taiwan 39 line ( eight-lane , also passing through the high-speed rail ) ; south side: six meters roadway. The east side of the building site is facing the other half part of the original courtyard house , the north side is a complete courtyard houses. The client want to build her own house, and by realizing the global climate change, and the Japan 311 seismic events, she requested at the outset with the idea of self-supply, rainwater reuse and other types of disaster prevention architecture strategy. So we tried to response such environmental conditions with design.

Dialogue with the Land
The location was formerly agriculture-based settlement, and there are many local industrial factories appeared through the changing times. After the completion of the high speed railway in recent years, it is becoming increasingly clear that the area is intertwined with old and new, tradition and technology, quiet and speed..... such contrast characteristics, these qualities create a unique geographical character. Therefore, while we follow the example of Taiwan's traditional architecture that combined with wood structure and load-bearing brick structure, and combine them into a modern steel structure with brick, on the one hand, we use this combination to produce a unique local architectural type whereby create the symbol of the janus characteristics of the environment on the other.
In addition, to response the sunshine but features hot summers at southern Taiwan, we tried to use the roof, windows, doors and other architectural elements, arranging them in specific vertical or horizontal space to create a good ventilation and shade; The roof angle is designed in order to maximize the solar power generation efficiency ( with solar energy unit).

"To interpret the owner's living characteristics by the spatial layout."
"To build an extraordinary architectural form by using ordinary materials."

Creative idea:
(1)Spatial characteristics of solo living
We use the minimum living space of one dweller as the design axis, and we define it as a minimum design area; and the non-daily use space for visiting guests is the maximum.
We started with two same square as the main structure of the plan. The northeast corner square (tentatively called building A) provide the owners private space, it is a three-floors mass; the other two-floors square shape mass (tentatively called building B) is for visiting friends and family use. Where two square superimposed becomes patio, leaving only a path about two meters wide by the north side of the patio and become the only indoor walkway between two square. Basic living space such as toilet, bedroom located on the third floor of building A, reading and entertainment space on the second floor and first floor, the building B almost doesn't need to be used when there are no visitors in this house.
By using the spatial orders to express the relationship between owner's and visitor's living space , we tried to purify the space. For example the kitchen and dining space is nearly not required by the owner when she is alone in this house, and therefore does not need to be set in building A, but in the first floor of building B, the two average spaces become special areas for friends and family. As another example, to maintain the privacy of owner's personal living, the bedroom is set on the third floor of building A and linked to the building B only through the north patio walkway.

Besides the residential function, we try to send a few messages through construction design, first, clear appearance of the architectural tectonic, and second, to highlight the characteristics of the material.
Configured with the following characteristics:
a. above the second floor, we lower and mosaic all the structural floors into the steel frame, the effect of this approach is that the exterior can be a complete presentation of pure "structure" without deliberately decoration, interior floor also rendered the existence of steel beams and form geometric patterns with wooden floors, it becomes a important feature of the second floor and 3rd floor.
b. There is a secondary structure formed by square shape steel pipes and with some sealing details in the steel construction system, bricks can be integrated with these structures and mosaicked in the frame, to achieve reasonable mechanical continuity of structure system, and in the same time to achieve that the heavy material such as bricks could have a dramatic sense of lightness.
c. Metal plates are deliberately mosaicked between the steel frames, so the main steel structure exposed on the facade, the smooth texture of metal plates and the rugged texture of bricks have an interesting dialog between interior and exterior.
d. There are almost no decorating material covered on the structure indoor, even the ceiling is omitted, so that the entire circulation pipelines are exposed and must share the responsibility of the visual aesthetic of interior with the structure, while at the same time this approach makes a great convenience of replacement and maintenance of the building's facilities and circulation system. 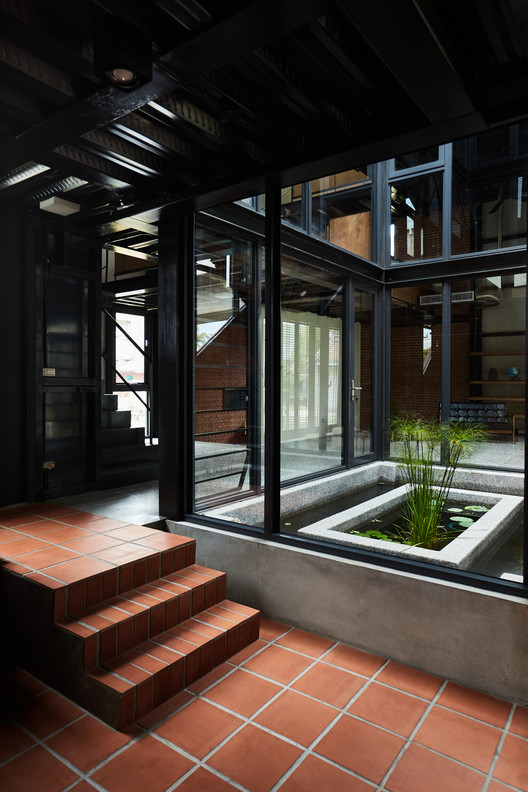 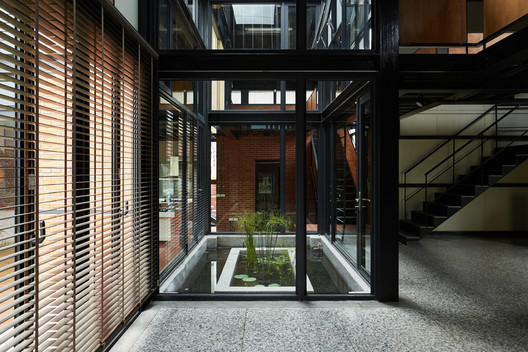