Overlooking the Al Ain Lake is a tower set on pilotis, so as to minimize its impact on the lake’s coastline, and still attract a wide variety of birds, frogs, fish, insects, and more.

An external textile veil shelters the entirety of this tower, like a “loose cap,” shielding the building from the sun, and providing a buffer air zone that constantly circulates air.

“The parachute veil is layered over a super-pressure balloon which crowns the tower. The size of the balloon changes according to need, allowing the buffer air zone to increase in size or retract," describe the architects in a press release. Furthermore, cool air from underground is utilized to “refresh the air contained by the veil,” which reduces air conditioning consumption within the building.

The design started in 2006 before the project was put on hold from 2007 until 2014, when it was definitively halted. 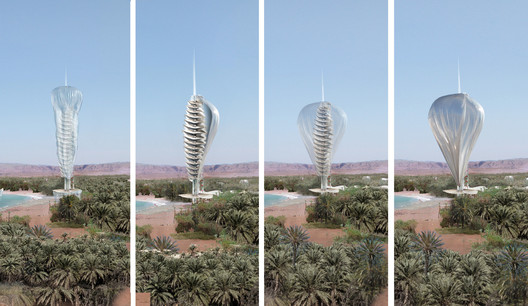