Students from the Frank Lloyd Wright School of Architecture, Taliesin West have designed and built “Little Shelters,” a collaborative project in the Sonoran Desert in Arizona, as part of a design and build studio led by little maps.

The project began with an individual exercise, where students Daniel Chapman, Mark-Thomas Cordova, Jaime Inostroza, Dylan Kessler, Pablo Moncayo, Natasha Vemulkonda, and Pierre Verbruggen each created their own temporary shelters. Partially due to harsh desert conditions, the students, with their instructor David Tapias, later decided to design and build as a collective effort instead.

The main objective was to utilise as many on-site resources as possible, but with a $2,000 budget from the school, the students purchased inexpensive materials from warehouses giving them the freedom to further explore their designs.

Overall, the project took 12 weeks to complete, and led to the construction of two shared shelters and a gathering space. Over future years, these shelters will be utilised by other students, who will transform, maintain, and document them on the little maps Website. 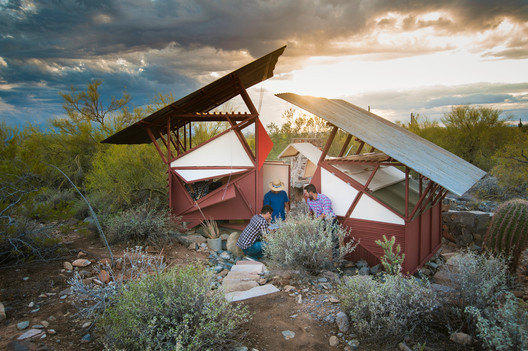