Save
Armidale House / Those Architects 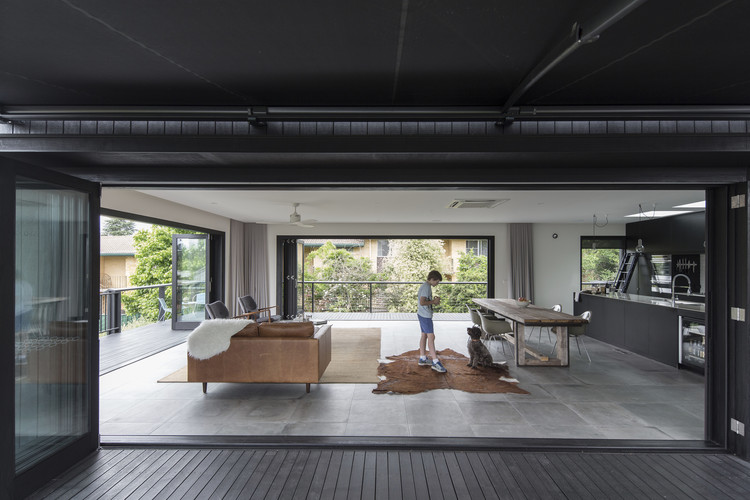 Text description provided by the architects. Our brief for the project was to transform a late 19th century heritage-listed four bedroom cottage in a quiet, leafy country town into a larger, light filled home for a growing family. To do that, we had to connect the existing house to the garden, creating a series of flexible spaces for contemporary living & entertaining.

A new kitchen/living/dining room and new outdoor living spaces totalling 165 sq metres were added, and an existing 25 sq metres converted into a secondary living room.
Our initial masterplan included the new pavilion and minor intervention to the existing cottage which was effectively Stage 1. A second stage is currently being designed. This will reconfigure the existing cottage internally, relocating the master bedroom and adding a walk in robe and ensuite. There are also plans to add a study and create storage in the four large bedrooms. We are also looking at ways to draw light in to the old part of the house.

One of our challenges with this house was deciding how to connect the built form to the large garden to the rear. To do that we had to deal with a significant level change between the existing cottage floor level and the back yard, and also work out how to respectfully hitch a major addition on to the back of the heritage listed cottage.

We conceived the new extension as an unashamedly contemporary ‘podium’ that would would anchor the building to the landscape, connecting the cottage to the garden, and the interiors to the sky. One of the defining characteristics of this region is the dramatic sky, which dominates your perception of the landscape, so we used the podium form to mediate the built form in between the ground plain and the vast sky, effectively using the architecture to intensify this connection. Inturn, this allowed us to respect the old house, essentially leaving it intact and creating a clear distinction between the two architectural forms. We then created spatial program between the two elements as the unification method.

The entry foyer now acts as that connecting device – it works programmatically for the house to separate the private areas, which are all at the front of the house within the existing cottage, and the public spaces – we arranged the living/dining/kitchen areas around a large wraparound deck which connects the internal program to the garden.

It was desirable to keep the levels consistent throughout the house so that it was easy to live in, and secondly, so that the addition would to sit ‘above’ the landscape, providing visual connection to the landscape and hills beyond from the living spaces and the deck. The rural town where the house is located, Armidale, sits in a valley. The sky, the treetops and the mountains you see from the rear part of the house is deliberate due to the way the building is elevated and sited.