Save
Pezo von Ellrichshausen's Vara Pavilion at the Venice Biennale is a Maze of Circular Forms
Presented by:

Pezo von Ellrichshausen’s Vara Pavilion for the 2016 Venice Biennale is described by the architects as “a series of exteriors within other exteriors.” Breaking down this crypticness, what emerges is a maze-like complex of circles – ten of them – formed with steel, cement, and painted plaster, which collectively create a series of walls, but no roof, thus forming a pavilion that is open to the elements from above. The 324 square meter pavilion’s title, “vara,” refers to an imprecise and obsolete Spanish unit of measurement, that was employed during the country’s conquering of America to trace and measure cities. Each of circles of the Vara Pavilion is a diameter of the unit, ranging from two to eleven. 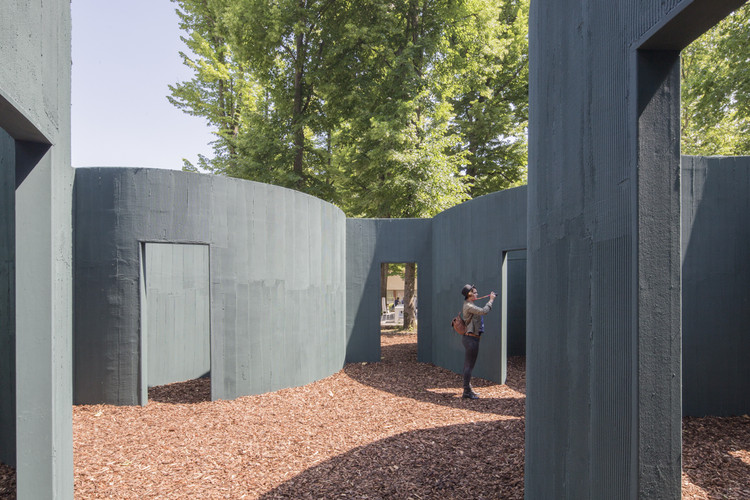 According to the architects, “the resulting sequence of spaces can be understood both as a traditional open plan – with several accesses [but] without any shape, hierarchy or predominant direction – and also as a limited arrangement of singular segments.” The interior spaces vary from “narrow and acute concavities” to “wide but irregular convex room” and “from overexposed cores to dark corners.”

"Since we believe architecture is a form of knowledge, it seems inevitable to face a triangular (or circular) problem: that what we know is no more than a diffuse field of disciplinary ideas; that those ideas are expanding over time; and that our limited understanding of them, and therefore of their value, cannot be fully conveyed to dilettantes," explain the architects. "A feasible response, we suppose, lies in the potential of discreet basic means to produce a rather normal and familiar building; a unique place with the unintelligible capacity to become something more than what it seems to be."

The Vara Pavilion is part of the 2016 Venice Biennale and is on view in the Giardini di Castello until November 27. The above video, shot in 4K, is part of a partnership between Spanish photographer Jesús Granada and ArchDaily. Granada's stock images of the Biennale can be obtained on his website, here.