Save
@1to1Billion: Inside Canada’s Contribution to the 2016 Venice Biennale
Presented by:

At a scale of 1:1 billion, the geological map of the world reveals planetary scales of operation for the largest resource extraction nation on the planet whose foreign policy is borne from legacies as colony, as confederation, country, and now, as global resource empire. In its divine, legal power to separate surface rights from mineral rights, the royal domain of the government—the Crown—exercises supreme authority over 95% of its territory making it the biggest landlord in the world. Not surprisingly, its coat-of-arms, commonwealth, constitution, even its parliament building look practically the same, it shares the same Head of State—Queen Elizabeth II. As the last remaining royal monarchy in the Americas, Canada is the brainchild of Queen Victoria II, the most powerful woman in history, who grew the British Empire to unprecedented magnitude in late 19th century. 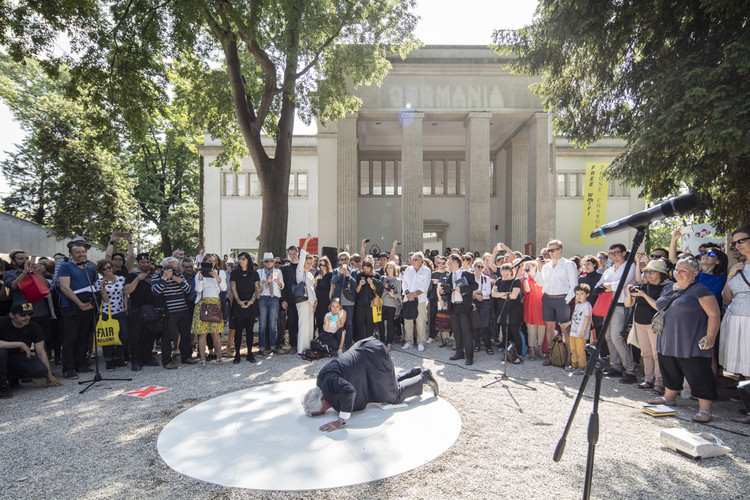 Home to over 75% of the planet’s prospecting and mining companies thanks to the Toronto Stock Exchange, nearly half of the 20,000 mining projects in the world shape the global image of Canada’s vast underground states of mineral wealth that edify the power of the Crown shining on the surface of the State. At 1 part per billion, the gold ore of lining open pit mines not only face the sky, they open a lens on the paper world of lands, leases, and laws, as well as the material world of mines, minerals, and markets, and the grounded world of tribes, treaties, and territories. Reporting from the edge of this emerging empire, what forces drive extractive policies that lead to systemic inequalities and how can cycles of geospatial domination be weakened?

If extraction has defined Canada for the past 800 years since the British Magna Carta—then exchange will revolutionize its future from the 22nd century onwards. Marking #TheLastVictoriaDay on May 25th 2016, the quintessential, territorial instrument of exploration, excavation, and extraction—the survey stake—will be driven into the heart of empires, under the Pines and Planes, at the junction of the UK, France, and Canada Pavilions in the Giardini of the Venice Biennale. Exposing the tensions, frictions, and resistances between map and territory, this counter-monument forged in pure gold will then be gifted to the Sovereign in a declarative gesture of retrocession and independence, #CrownNoMore at the close of the Biennale on November 27th 2016, the eve of Canada's 150th Anniversary of Confederation. Retroactively, 800 years of empire building unfold below grade in a short film of 800 images from 800 contributors in 800 seconds.

By miniaturizing this extensive history in a personal experience, this inverted territorial intervention magnifies territorial realities at a scale of 1:1 to elicit a deeper discourse on the complex ecologies and vast geopolitics of resource extraction. Disentangling and reconfiguring synergies between life, law, and land, a manifesto resource urbanism reimagines the surface of the state towards the 22nd century.

A portion of the proceeds of the exhibition will be invested in the reclamation of a contaminated gold mine in Sardinia formerly operated and then abandoned by Canadian mining company Buffalo Gold following the global economic crisis in 2009. Outstanding proceeds will be shared with territorial organizations in Canada where matters of resource extraction and land-based livelihoods are vital for the future.