In honor of the centenary of MIT's move to the Cambridge Campus, the university has carried out a series of public events this spring, including the installation of two innovative architecture and design projects: Memory Matrix and Biaxial Tower.

Installed in the iconic arch of MIT’s Wiesner Building (designed by Pritzker Prize winner and MIT alumni I.M. Pei), Memory Matrix is a giant screen made of intricate pixel-like Plexiglass elements, arranged to form larger matrix-like screens that reveal an image of the recently destroyed Arch of Triumph in Palmyra. The image is only visible during the day through the movement of wind and light, and at night, through the illumination of the pixels. Spearheaded by Azra Aksamija, Memory Matrix will be on display from April 23 through May 7.

Memory Matrix also features creative contributions from various groups, including Syrian refugees in Jordan, who selected threatened or destroyed heritage sites that are significant to them. The shapes of the sites were then laser cut into the display. Positive components of the cut pixels will then be used to create jewelry that will be sold to fundraise the education of Syrian youth in Jordan.

Biaxial Tower, by Self-Assembly Lab, MIT + TAIT Towers + Atelier One, was built as a site for performances starting April 23 and continuing through the summer and fall. A 60 foot high and 30 foot wide tower, it is installed at the center of MIT’s campus on Mass. Ave. Constructed from 36 woven fiberglass tubes in the form of a biaxial weave to create an expanding and contracting surface, the tower organically transforms into various geometric configurations, like a dome or a cylinder. As a step in active architecture, the project aims to point towards a future of architectural shells, canopies, performance venues, stadium roofs, and other sizeable structures that can transition between functions.

News via Resnicow and Associates and the Massachusetts Institute of Technology. 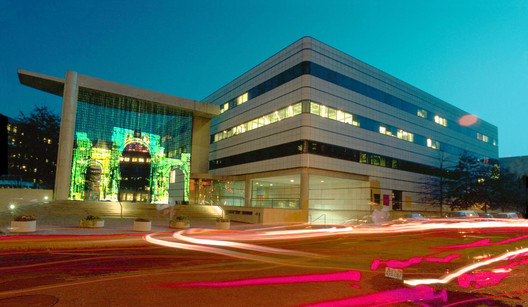