Ennead Architects have unveiled their proposed design for the Tianjin Academy of Fine Arts campus expansion, master planning and architectural design competition. “This campus expansion and re-envisioning positions Tianjin Academy of Fine Arts—one of China’s top schools of fine art—as an Academy in the Park,” inspired by nature and an oasis destination within the dense urban fabric of Tianjin, write the architects.

The design includes the addition of an identifiable core to the Academy’s historic quad, so as to integrate the institution with the adjacent neighborhood and strengthen its influence as a creative and cultural hub for the city and region.

The massing, scale, and proportions of the new academic core building draw inspiration from the historic campus buildings, which utilize simple structural bays to regulate their façades.

The project additionally includes a museum, which as an “art container,” is designed to be art in itself. The design also includes an art park, which features the campus’ figural studio buildings -- playful pavilions with courtyards themed around different approaches to making art.

The core and professional studio buildings will be connected by a continuous ground-level podium and concourse, unifying the community through spaces for social connections. 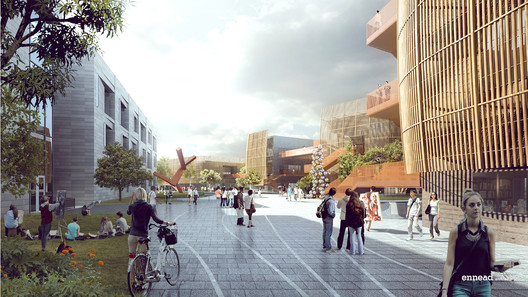