What would some of our favorite buildings do if they could stand up and walk around? From the Leadenhall building to the Petronas Towers and One Central Park, designer and illustrator Michael William Lester has taken 20 architectural landmarks from around the world and brought them to life in a series of animated GIFs.

“Good architecture interacts with its surroundings,” writes Lester on his website. “It gives off energy, sparks interaction and pulls so much life in that the building itself lives and breaths.”

“WHILE LONDON IS HARD AT WORK, THE LEADENHALL BUILDING GETS ITS AFTERNOON NAP.”

“THE BURJ AL ARAB DIPPED INTO THE ARABIAN GULF IN 1999 AND HASN’T LEFT THE WATER SINCE.”

“HALLGRÍMSKIRKJA WELCOMES VISITORS WITH OPEN ARMS, MUCH LIKE THE REST OF ICELAND.”

“BRASÍLIA AIRPORT WAS UPDATED WITH A MORE HANDS-ON TERMINAL FOR THE 2014 WORLD CUP.”

“A FIRM HANDSHAKE LET THE PETRONAS TOWERS PUT THEIR DIFFERENCES BEHIND THEM.”

“WEMBLEY STADIUM ITSELF DOESN’T HAVE A GREAT VIEW OF THE PITCH BUT THE WI-FI IS GOOD.”

“THE HIGHCLIFFS MET IN 2003 AND HAVE BEEN THERE FOR EACH OTHER EVER SINCE.”

“THE TEXTILES INDUSTRY IS COMPETITIVE. THE COLTEJER BUILDING SLEEPS WITH ONE EYE OPEN.”

All descriptions and GIFS courtesy of Michael William Lester 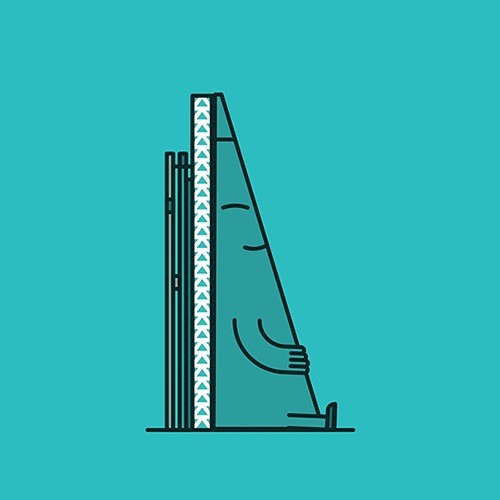